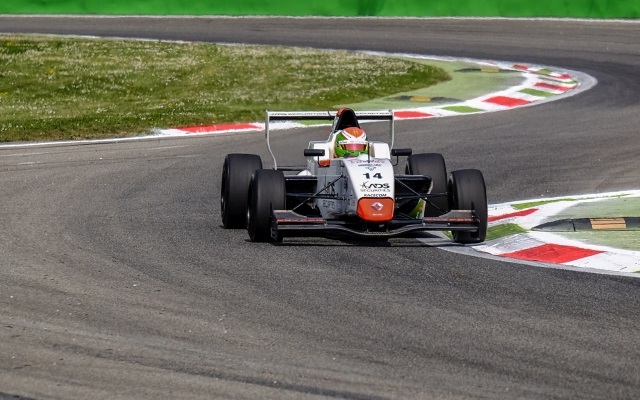 Louis Deletraz was victorious in the second and final race of the first Formula Renault 2.0 NEC round of 2015 at Monza.

The victory salvaged the Swiss driver’s weekend after a troubled first race where he only finished 14th after a drive-through penalty.

Starting from pole again, Deletraz gave up the lead to Ukyo Sasahara after a somewhat sluggish getaway, only to take it back at the end of the opening lap.

It was smooth sailing for Deletraz from that point on. Saturday’s winner Sasahara was the only one able to stay close to the Swiss driver and finished three seconds behind.

Valentin Hasse-Clot celebrated an impressive podium in his debut round in Formula Renault 2.0, having to defend from Kevin Jorg for the bigger part of the race.

Jorg was looking to get past the French newcomer when his race took an unfortunate turn. The Swiss driver was sent into a spin at turn one by the duo of Callan O’Keeffe and Dennis Olsen, who were battling for fifth, going side-by-side into the corner.

While Jorg managed to rejoin in ninth, O’Keeffe was forced to retire two laps before the end.

Profiting from the clashes ahead, Force India junior Jehan Daruvala made it up to fourth just ahead of his teammate and fellow rookie Alex Gill.

Olsen had to settle for sixth, followed by another Manor driver Lasse Sorensen and Strakka’s Max Defourny. The top ten was completed by Jorg and Luke Chudleigh.