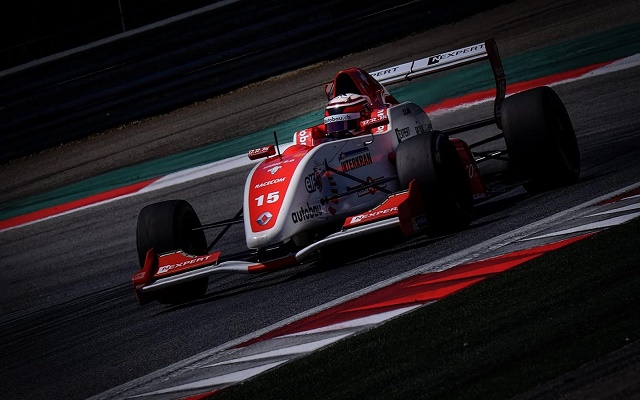 Despite not having topped either practice session, points leader Deletraz extended his streak of consecutive NEC poles to five in qualifying one, before Jorg finally cut it short in session two.

Deletraz ran less laps than most of the field in the first shootout, but still came out two tenths up on compatriot Jorg, with karting prodigy Jehan Daruvala recording his best qualifying in single-seaters yet a further two tenths down.

Jorg finally had his revenge in qualifying two, taking two tenths out of Deletraz with a late lap. Daruvala was third again, his teammate and fellow rookie Gill settling for fourth after leading the session with three minutes to go.

Fortec’s Ferdinand Habsburg made it all four cars in the top ten for the British team, while Sasahara completed the five rows.

GP3 regular Alex Palou, racing this weekend to prepare for his championship’s round at Spielberg, was 17th and 14th for Inter Europol, beating his teammate David Richert on both occasions.

The grid for the third race this weekend was determined by second-best times in session two, with Deletraz claiming his sixth pole of the season ahead of Jorg and Gill.