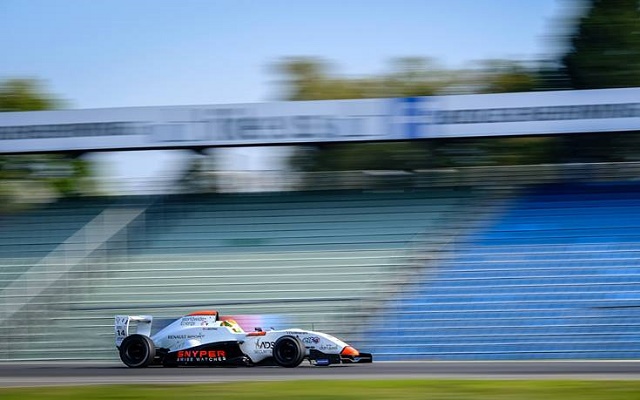 Josef Kaufmann Racing’s Louis Deletraz has left himself with one point to score in the two remaining Formula Renault 2.0 NEC races after winning the first race at Hockenheim.

The Swiss champion-elect, who had earlier secured pole for all three of the weekend’s races, converted his first pole into a win with ease.

He led lights-to-flag, managing his gap to second-placed Ukyo Sasahara and eventually finishing 2.4 seconds ahead of the Japanese driver.

Sasahara, however, remains in mathematical contention as he now sits 59 points adrift of Deletraz with 60 available.

Kevin Jorg, who entered the race as teammate Deletraz’s closest rival, dropped from second to fourth over the opening lap, passed by Sasahara into turn two and then running forced wide out of the hairpin by Jehan Daruvala.

He couldn’t re-pass Daruvala after that and had to settle for fourth, which left him 61 points behind Deletraz and out of contention.

The race saw an early safety car period for two separate incidents – Pontus Fredricsson punted off in a three-wide move and Alex Gill being spun by Colin Noble.

Deletraz will now need to finish either of the remaining races in the top 20 to confirm his title and will be champion regardless if Sasahara doesn’t win both.