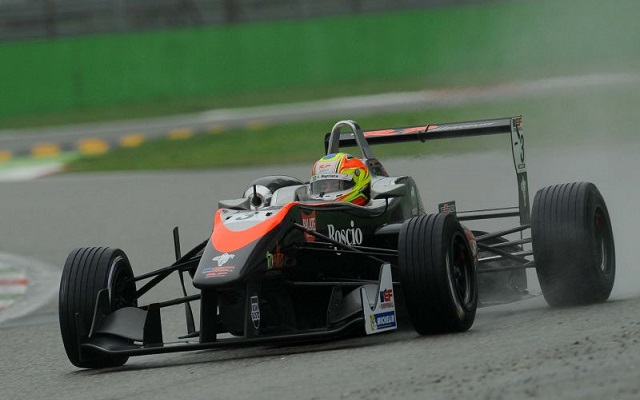 Vitor Baptista was victorious in the first Euroformula Open race at Monza and extended his championship lead over Konstantin Tereshchenko to 14 points.

Baptista and Tereschenko were both able to get ahead of the slowly starting Yu Kanamaru and it was the Russian leaving the first turn in the lead, having cut the chicane to avoid the RP driver, who nearly spun himself around.

Baptista was briefly back into the lead on lap 3, when Tereschenko ran wide at the Parabolica but the Russian managed to slipstream his way back on the main straight.

Moreover, Baptista lost second place to Kanamaru as well, but he was also able to retake it soon enough in an overtake which resulted in contact between the duo, forcing the Japanese off track as he fell behind Tanart Sathienthirakul and Damiano Fioravanti.

The gap Tereshchenko built soon disappeared as Baptista closed the gap rapidly and made a successful move on lap seven.

Tereshchenko managed to keep up with Baptista for a while but a second mistake at the final turn saw him fall behind Fioravanti and he soon received a five-second time penalty for not respecting track limits.

From that point on, a three-way battle emerged for second, which resulted in contact between Tereshchenko and Sathienthirakul when the latter tried to dive down the inside at turn one.

As a result, Sathienthirakul spun out and collected Fioravanti.

Surviving the incident, Tereshchenko managed to close the gap just enough to try a desperate and ultimately unsuccessful overtaking attempt on the last lap but it was Baptista who took the win.

Tereshchenko had to settle for third after his time penalty as Kanamaru moved up to second.

A duel between Diego Menchaca and William Barbosa ended up with the Mexican taking fourth and both drivers taking their best results of the season, as did Henrique Baptista in sixth.

The RP duo of Igor Walilko and Andres Saravia finished seventh and eighth respectively as the top ten was completed by Ahmed Al Ghanem and Leonardo Pulcini, who dropped down from fourth after a spin at the Ascari chicane.