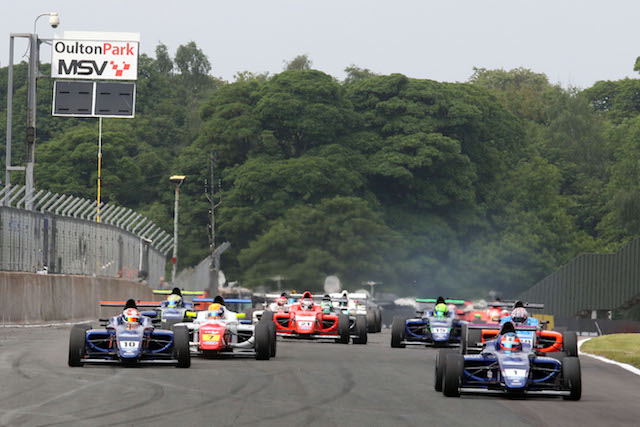 Devlin DeFrancesco led from pole position to chequered flag for a second straight British Formula 4 win in the opening race of the Oulton Park weekend.

After edging Carlin team-mate Petru Florescu?for pole position by 0.032 seconds, Canadian driver DeFrancesco opened up a 1.3-second lead on the first lap of the race.

He stretched that gap as high as 2.5s as Florescu defended from a fast-starting?Jamie Caroline over the opening laps, before the Romanian began to close in again over the second half of the race.

DeFrancesco remained out of reach however, eventually winning by 1.6s.

Second was enough for Florescu to regain the championship lead, having started the weekend fourth in the standings but only six points behind the leader.

Alex Quinn?was passed by Caroline at the start but remained close to the leaders on his way to fourth, ahead of the remaining two Carlin drivers Max Fewtrell and?James Pull who held fifth and sixth throughout.

Ayrton Simmons had qualified seventh in only his second race weekend but then stalled at the start, enabling?Arden team-mate?Rafa Martins to finish seventh ahead of?Zane Goddard.

Erstwhile championship leader?Sennan Fielding and JHR team-mate?Billy Monger went from the seventh row of the grid to sitting inside the top 10 on the first lap, and Monger got ahead of his considerably more experienced team-mate for ninth on the following tour.

Red Bull Junior?Luis Leeds, who had been second in the standings, was ruled out early in qualifying by suspension damage, and could only make up four places to finish 13th in a depleted 17-car field.