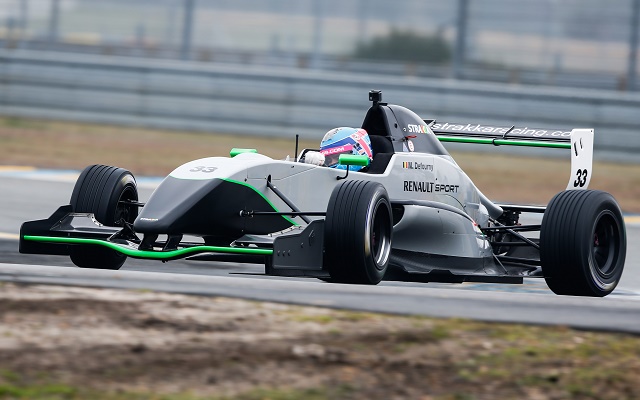 Defourny topped three of the six sessions and managed to log the three quickest laps of the running.

Vanthoor then powered through to the lead late in session two, with Hamprecht and Riener behind. Defourny and Geerts completed the top five.

Defourny then became the first driver to dip into the 1:57s and was more than half a second clear of Riener. Hyman led Hamprecht in third, with Vanthoor in fifth.

Riener was back into the lead in session four, a tenth up on Defourny and Vanthoor. Nikita Mazepin and Hyman were far behind in fourth and fifth.

Defourny notched up his second session-topping lap of the day in the penultimate run, comfortably in the clear of Vanthoor and Robin Hansson. Josef Zaruba and Mazepin, fourth and fifth respectively, were a second off.

The test day concluded with Defourny one-upping his earlier benchmark from session three, while Pietro Fittipaldi of Fortec moved up to second. Vanthoor, Riener and Mazepin concluded the top five.

The aforementioned Hyman took to the track with Mark Godwin Racing, while Oliver Soderstrom, who was set for a double campaign in Formula Renault 1.6 before the European Series folded, partnered Hansson at Fragus BR.

Fortec’s FIA F3 drivers Fittipaldi and Matt Rao took the opportunity to get some mileage around Hockenheim, which will be visited twice by the series.

In addition to the 20 FR2.0 cars, two FinnDrive teammates completed the day’s programme in 1.6 machinery, with Ilmari Korpivaara clearing Juuso Puhakka by less than a tenth.

Ameya Vaidyanathan to also race in MSA Formula for JTR