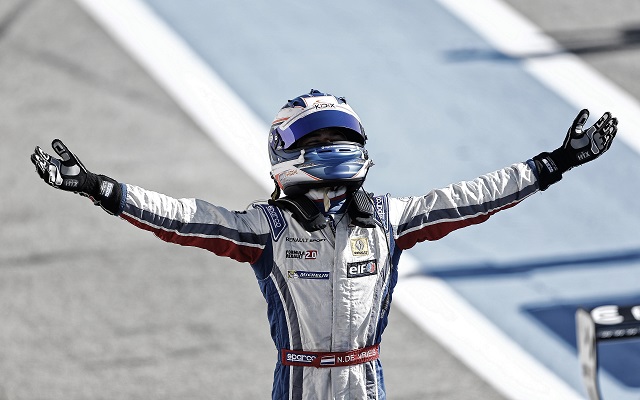 Eurocup Formula Renault 2.0 champion Nyck de Vries added a fifth victory to his title-winning campaign in race one of the season finale at Jerez.

The Dutchman, who started alongside poleman Dennis Olsen, found his way past the Norwegian in the middle of the race and went on to take the checkered flag.

The race was interrupted early on after a series of incidents on the opening lap. Coming out of turn one, Koiranen teammates Hong Li Ye and Stefan Riener came to blows, while later on in the race, Kevin Jorg ended up spun around and collected by Ben Barnicoat at high speed.

It took a little less than ten minutes for the stricken cars to be removed and, at the restart, race leader Olsen confidently pulled ahead of de Vries.

However, the Koiranen man stayed within close proximity of the Norwegian over the subsequent laps and, on lap 8, went on to pull off a spectacular late-braking move into Curva Dry Sac to claim first place.

Despite missing out on the win, the Norwegian bagged enough points to claim the runner-up spot in the championship.

Having moved into third on the opening lap, Jack Aitken maintained the position until the end of the race, claiming his third podium of the campaign.

Hans Villemi originally slipped behind Alex Albon, but went on to overtake the KTR man later on to claim fourth.

UPDATE: Dennis Olsen has been excluded from the results of the race due to a technical infringement.