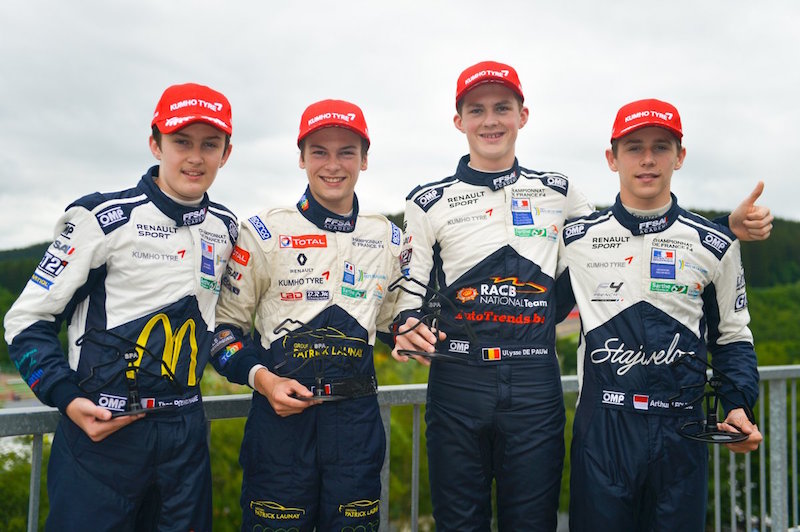 Belgian prospect Ulysse de Pauw starred on home ground in the French Formula 4 round at Spa-Francorchamps, as he and Theo Pourchaire claimed their maiden car wins and Stuart White also got off the mark for 2018.

De Pauw, backed by the same Belgian federation scheme that gave McLaren Formula 1 driver Stoffel Vandoorne his break in F4, had only managed a podium in the reversed-grid race at Pau prior the Spa event but started well with the fastest time in a wet free practice.

In similar conditions in qualifying however, Arthur Leclerc shone with a performance reminiscent of brother Charles’ Formula 2 effort at the track last year, beating Caio Collet to pole by three tenths of a second while De Pauw was fifth behind Pourchaire and White, more than a second off pole.

Leclerc kept the lead on the first lap of the opening race, but De Pauw came from fourth to first into Les Combes on lap two, while Collet and White collided behind him, putting points leader Collet out with damage.

De Pauw was able to build a second’s margin over Leclerc, and his advantage doubled when Pierre-Louis Chovet (who started seventh) took second place away on lap four. White came fourth, followed by Pourchaire and Adam Eteki.

Fourteen-year-old Pourchaire came from sixth on the reversed grid to win race two, steadily working his way into the top three before getting past duelling Belgians Esteban Muth and Ugo de Wilde for the lead on lap five.

A lap later, former points leader de Wilde was eliminated at Les Combes together with Eteki and Reshad de Gerus, causing the race to end under safety car.

De Pauw avoided the incident to finish third after starting 10th, with White just behind in fourth and Collet beating Leclerc to fifth from the rear of the grid.

In race three, Collet took the lead away from Leclerc on the opening lap, with White rising from fifth to third before an early safety car intervention.

At the restart, White pounced on Leclerc, and two laps later the South African grabbed the lead from Collet and kept the Brazilian at bay to win by 0.675 seconds.

Despite his non-finish in race one, Collet extended his championship lead over the Spa weekend from 2.5 points to 11.5.

De Pauw is now his closest challenger after coming sixth in race three, behind Chovet, Pourchaire and Leclerc.