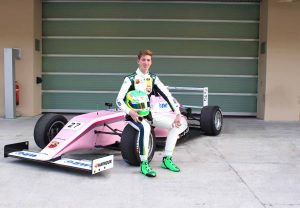 The 16-year-old German finished second in his native karting championship last year, while also testing in an F4 car for his father’s US Racing Team.

He will drive for the team, which is competing in the UAE in partnership with?Rasgaira Motorsports Team, in the second round of the season this weekend at Yas Marina, and may race in further events.

“I am looking forward to ?nally race in Formula 4 cars,” Schumacher Jr said.

“After testing last year with US Racing to prepare for the 2018 season, I can?t wait to ?nally jump in the car to race.”

Schumacher will also compete with his father’s team in ADAC F4, which uses the same Tatuus chassis and engine that the UAE championship does.

“I think the F4 UAE is a great winter programme to prepare for the F4 season in Germany, and driving my ?rst race on an F1 circuit makes it even more special.”

Belgian Charles Weerts leads the F4 UAE standings after the first round, with the top four drivers separated by 10 points.