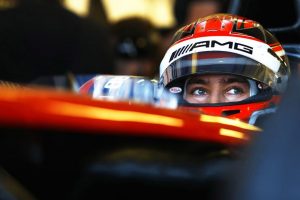 The 19-year-old Englishman drove for the team in GP3 last year, having also spent his last year in F3 with the technically-partnered Hitech GP squad, and will once again drive alongside Jack Aitken, who was his team-mate and title rival in 2017.

In addition to winning the GP3 title last year, Russell also sampled Mercedes and Force India’s F1 machinery and made his first F2 appearance in the post-season Abu Dhabi test, although that will be of limited use as 2018 marks the introduction of the new Dallara F2/18 car.

“I am very happy to be able to race in Formula 2 while continuing to drive for ART Grand Prix,” said Russell.

“We had a very successful year together last season and so it makes sense to continue working together and seek out new successes.

“With the introduction of a new F2 car, it will be challenging for all the teams to optimise the set-up from the start of the season, but I have every confidence in ART Grand Prix to get there and to be competitive as quickly as possible.

“I cannot wait to take part in the first race and fight against some of the best drivers and teams at the pinnacle of junior motorsport.”

“ART Grand Prix had a very enjoyable and fruitful year with George in GP3, both sporting and personal, so it was only natural that we renewed our partnership for F2,” ART team manager Sebastien Philippe said.

“ART’s experience together with George’s talent should allow us to fight and defend our title in the entry series to F1.”

The French squad is the fourth F2 team to reveal its line-up for the coming season, and the first to choose an all-rookie one.