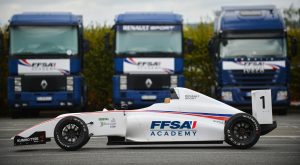 Leclerc has had a limited karting career, but did win the spec Kart Racing Academy championship in 2014 and tested one of Prema’s F4 cars late last year.

Brazlian Collet, 15, was signed up by Leclerc Sr’s manager Todt in 2016 and finished 28th in the OK class of the CIK-FIA European championship last year with the Birel ART team in his first year out of junior karting.

Pierre-Louis Chovet and Noah Watt, who contested the final three rounds of 2017, and Adam Eteki, who took part in the Barcelona round, will return for the 2018 season, which will be?the first run to FIA F4 regulations with a Mygale chassis.

Other newcomers will include?Ulysse de Pauw, winner of the winner of the RACB prize that launched Stoffel Vandoorne’s career, as well as Theo Pourchiare, who was French champion and third in the world championship in OK Junior in 2016 and was a European championship race-winner after stepping up to OK aged 13 last year.

The 2018 season starts at Nogaro (March 31 – April 1), and travels to five other locations, including the Pau street circuit, before ending at Paul Ricard (October 12-14).