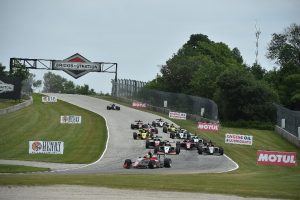 David Malukas and BN Racing dominated the Pro Mazda double-header at Road America, taking all but one of the available points with the assistance of new signing Toby Sowery.

Malukas took pole and victory in both races, his and the team’s first wins in car racing, while Sowery finished second twice and took the race one fastest lap. The 1m59.8151s lap Malukas set for race two pole was also the track record.

Lamborghini-contracted Sowery has been supporting KDC Racing in Italian Formula 4 this year, but which has not been present for the last two rounds. His switch to Pro Mazda and BN Racing seemed to be an inspired move, with the team looking unbeatable around the 6.515 kilometre track.

The BN Racing team-mates stormed off into the distance, breaking the lap record several times on the way to a historic one-two.

Franzoni drove his current Juncos Indy Lights car, while Dempsey drove the car Green used in Pro Mazda last year on the way to eighth in the standings with the team.

Malukas’s victory was a little harder this time, with Cunha taking the lead from him around the outside of Turn 1 on the first lap. He reclaimed it two corners later, then had to wait due to a safety car period required to move debutant Raul Guzman’s stranded RP Motorsport car from Turn 5.

On the restart second to fourth went three-wide into Turn 1, with Sowery overtaking Cunha and VeeKay at the same time to move into second. He then pursued his team-mate, bettering the lap record again in the process, but could not get within a second of the young American.

Scott finished third again, although came under late pressure from Thompson, who snatched the fastest lap on the penultimate tour. Thompson had tangled with Guzman on the first lap, dropping to 12th, but rose back up the field in remarkable style to once again extend his championship lead.

Formula Renault Eurocup midfielder Guzman impressed as replacement for Lodovico Laurini, finishing seventh in his first race and qualifying third in the second before being crashed out.