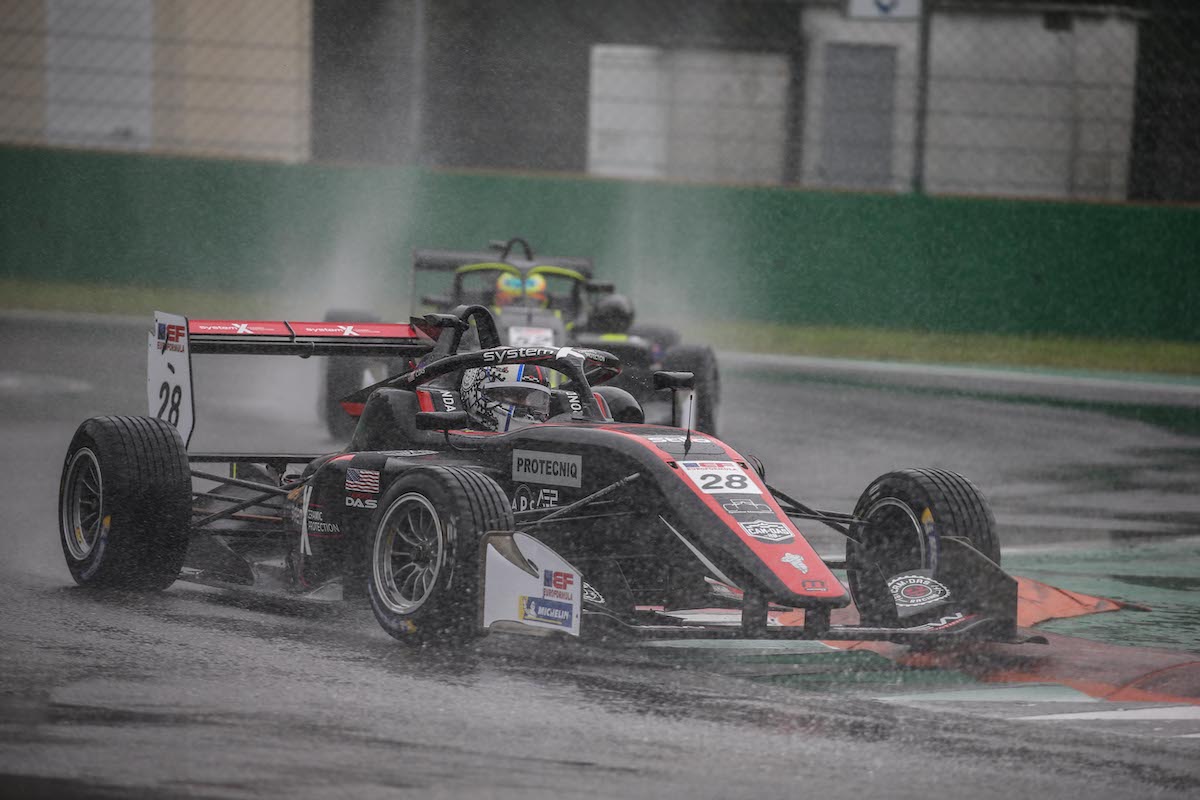 Cameron Das secured yet another Euroformula win in a shortened final race of the Monza round, as monsoon-like conditions led to the race being red-flagged after two safety car periods.

Despite atrocious conditions, the race was given a standing start, resulting in chaos on the run to Turn 1.

There was a moment where drivers ran five-wide in the run down to the first chicane, which saw Christian Mansell run all four wheels of his Motopark car onto the grass.

It was two incidents on this chaotic first lap that decided the final result.

The Turkish driver then produced an identical mistake at the Roggia chicane. However, he did not allow Trulli back through.

Both drivers were handed three-second penalties for their off-track misdemeanours so, by the time the race was red-flagged, Das was just close enough to Bolukbasi to be handed the win.

It seemed only a matter of time until the safety car was called upon, and it was a clash between Enzo Scionti (Drivex School) and Louis Foster (CryptoTower), in which both drivers retired with suspension damage, that temporarily paused proceedings.

Foster, Das’s main championship rival going into this weekend, endured a horrid three races as he failed to finish a single one, all but ruling him out of contention.

The safety car had barely returned to the pits when Nico Pino spun his Drivex School car into the gravel, beaching it at the Roggia chicane, nullifying the race once more.

Then, once the race restarted for the final time, Filip Kaminiarz spun his CryptoTower Racing car on the exit of the second Lesmo, but luckily kept his car going.

This incident was a precursor to the eventual red flag, which was finally brought out when race leader Bolukbasi was clearly aquaplaning down the pit straight before careering straight over the grass at the chicane, damaging his front wing.

Thanks to the red flag, Bolukbasi and Trulli were still able to secure second and third on the podium despite their penalties.

Mansell recovered to fourth after dropping to 10th as a result of running on the grass at the start, just ahead of Motopark team-mate Reshad de Gerus.

Despite his spin under the second safety car, Simonazzi produced an excellent drive to take sixth, with Brad Benavides (Carlin) and Nazim Azman (Motopark) in seventh and eighth respectively.

Kaminiarz seemed in prime position to inherit the final spot on the podium once Trulli’s penalty was applied, but his spin saw him plunge down the order to ninth, just ahead of race two winner Casper Stevenson.

Josh Mason was the last of the finishers in 11th having started in the pit lane to avoid any potential incidents on the first lap.