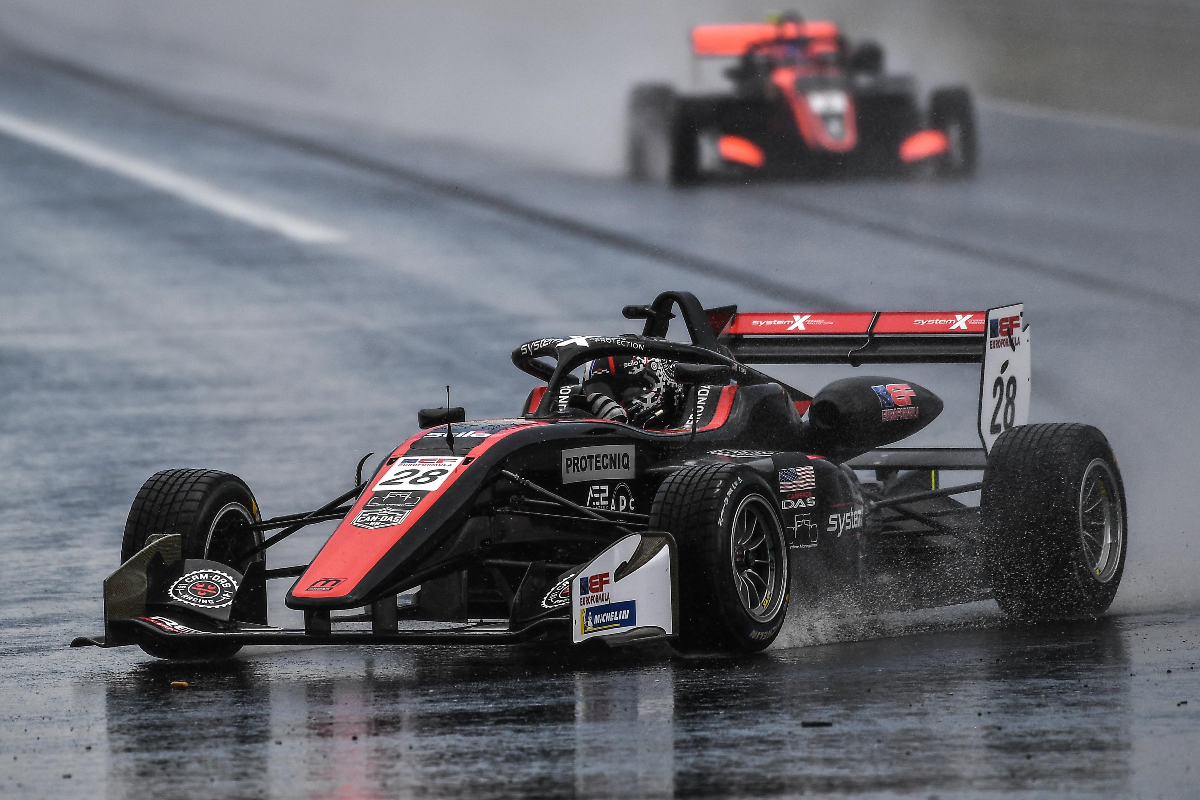 Euroformula points leader Cameron Das had a roller-coaster weekend at the Hungaroring, but a wet-weather win meant he didn’t take a hit to his championship lead.

The Motopark driver qualified second for race one, which he moved into the lead of at the opening corner and was on course for victory until lap seven of 18 when one of his front brakes failed.

After the pedal went at turn five and cost Das the lead, trying the brakes again at turn six sent him into the gravel and he had to retire.

“I’m really, really happy with that result,” Das said of his victory in the sodden race three, which meant he left the Hungaroring with the same 19-point advantage he arrived to it with.

“We’ve had a really challenging weekend, had to replace the chassis on Friday, there was some tuning differences we needed to make with the new chassis in quali so we weren’t right there in quali, and then we had a brake failure in race one while we were leading the race, so I’ve kind of had it all so far. But it’s really, really good to be back [at the front].”

The race one retirement put him at the back of the grid for race two, in which he had steering issues. Pitting for a new steering wheel solved that but he could only finish 10th, although fastest lap put him on pole for the final race which he won.

A significant portion of race three ran behind the safety car due a rain storm hitting the circuit, but the track did dry up considerably by the time Das met the chequered flag for victory.

“In the beginning, it was really, really difficult,” he said of the weather.

“Turn 11 especially, even when we were behind the safety car we were aquaplaning, even at those low speeds.

“So I was a bit nervous on the first lap, being the first one to go through at full speed. I think I nearly went off, to be quite honest, but kept it on the track and just put in the solid laptimes.”

His team-mate Vivien Keszthelyi also had a weekend plagued with car issues, and was one of the unlucky drivers to aquaplain off on standing water on the track in race three.

The Hungarian driver had straight-line speed issues through free practice that required a replacement Spiess engine to be put in her car, but further issues meant the original unit was put back in just ahead of race three, a task the team said they completed in under 55 minutes.

“Incredibly proud to see how hard they worked on my car all weekend long and especially just before race three to change the engine in such a short time,” said Keszthelyi. “Beyond thankful that I can be part of Motopark and surrounded by professionals.”

Why Bolukbasi was against the odds for a Euroformula debut splash