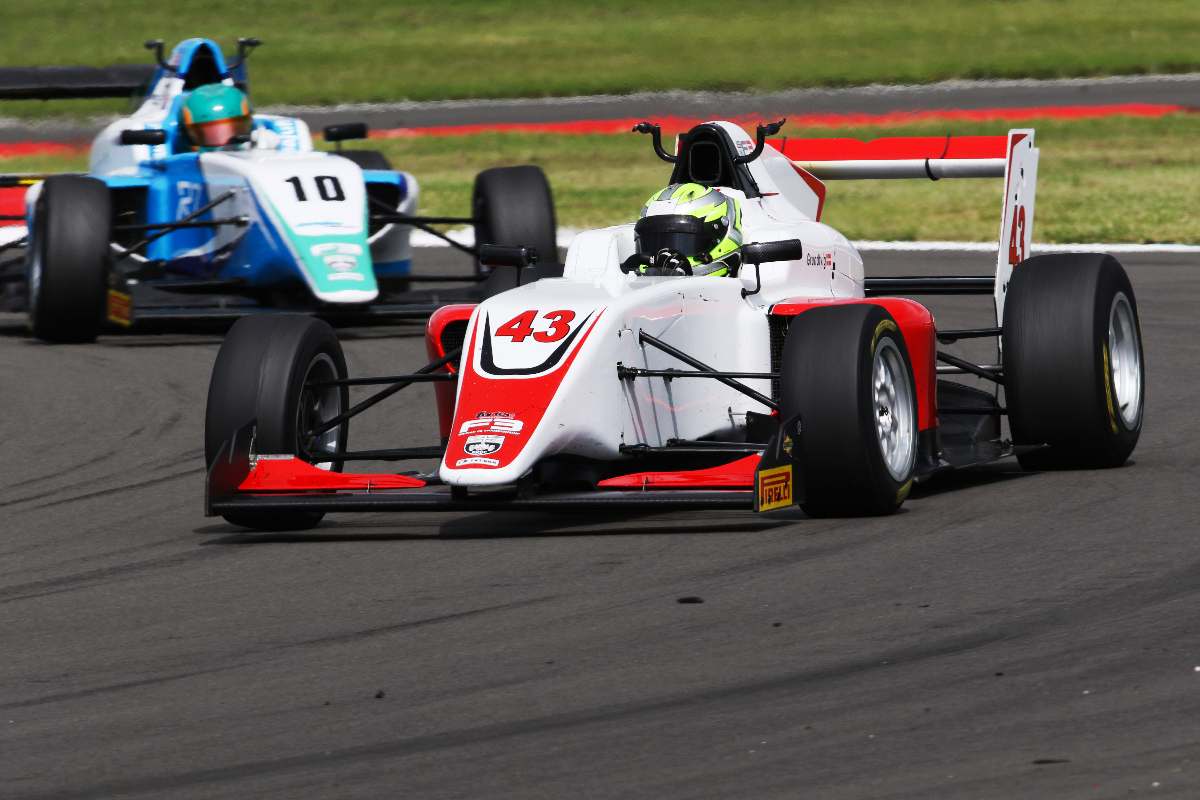 From there he opening a gap to Grundtvig, who had moved up to second place on lap one, before the safety car came out on lap four of 12.

Carlin’s Zak O’Sullivan, who won the first two races of the weekend, made contact with Hitech GP’s Reece Ushijima at the Melbourne Hairpin, which ended their races. Javier Sagrera also appeared to be involved, as he was way off the pack afterwards.

O’Sullivan’s car was retrieved quickly, and the race resumed one lap later. Marzorati initially pulled away from Grundtvig on the restart, but the Danw was able to come back and work his way into the lead at Redgate as the race neared half-distance.

Marzorati was unable to keep in touch and later found himself under pressure from Hitech’s Sebastian Alvarez over second.

Grundtvig, whose previous best result was fifth, opened up a lead to take his first British F3 win and podium.

Marzorati took second – also his best result – while Alvarez was denied a podium by a five-second track limits penalty. That place instead went to Elite Motorsport’s Tom Lebbon, who earned the most points for positions gained.

Douglas’s Dexter Patterson and Carlin’s Bryce Aron diced in the race and ended up fourth and fifth, ahead of series debutant Roman Bilinski.

Horsten was excluded from race two for colliding with team-mate Ushijima and had to start at the back for race three.

It was a difficult race for Arden’s Alex Connor from the back. He ran wide on the run-up to McLeans after working his way to 12th. He got airborne and subsequently retired.

Juffali was on course for the top five before running wide on the penultimate lap and retiring.

Simmons started fourth, but was forced wide by team-mate Marzorati at McLeans. He dropped a few more places after another wide moment.

Jose Garfias was in the top 10 on the road but he too was penalised and dropped to 11th and the last of the train of cars. Roberto Faria finished 13th after a failed pass on Garfias towards the end, moments after passing Aron.