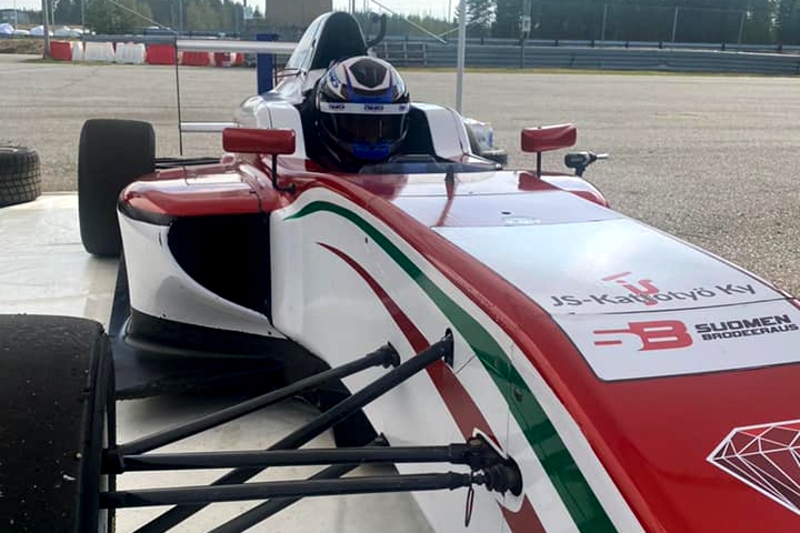 Karting graduates Henri Saaskilahti and Arto Ojaranta claimed the victories in the second round of the Formula Academy Finland season at Kemora.

Both were beaten by Leevi Vappula, another driver moving into the series from karting, to pole on Saturday. Vappula set the pace by just 0.033 seconds over Saaskilahti, with debutant Ojaranta 0.156s behind in third.

It was Rubintor Racing’s Saaskilahti who had the advantage in the first race, being the only driver able to just about keep up with the Formula 3 cars of the Formula Open Finland series that the Formula 4-based FAcademy Finland races with.

In doing so, it meant his 10-second advantage on the penultimate lap ballooned to a lap, as F3 driver Juha Maki-Jouppi had already lapped his opponents and so their races ended shortly after Maki-Jouppi crossed the line.

That allowed Saaskilahti to back off on the final lap, and while he finished almost a minute off Maki-Jouppi he took an assertive win over his opponents.

Points leader Jussi Kuivakangas had a comfortable advantage in second place, while Vappula diced with the other F3 cars and finished third. Ojaranta, a champion of Finland’s national championship for KZ2 shifter karts and who only started testing in single-seaters earlier this month, was a distant fourth.

Torrential rain hit the second race, which took place on Sunday, and the lighter, more nimble F4 cars were more competitive against the F3 cars as a result.

It was an exciting race which ended with Ojaranta pipping Kuivakangas to first place on a slippy track. Saaskilahti admitted he was too cautious with his approach in the wet and he finished third, 5.818s behind, while Vappula only just ended up being a lap down after FOpen winner Maki-Jouppi came by him within sight of the start/finish line.

The absence of Nikita Alexandrov, and karting-focused reigning champion Axel Saarniala, meant Kuivakangas’s championship lead has grown to 21 points and it’s now Saaskilahti who is his closest challenger.