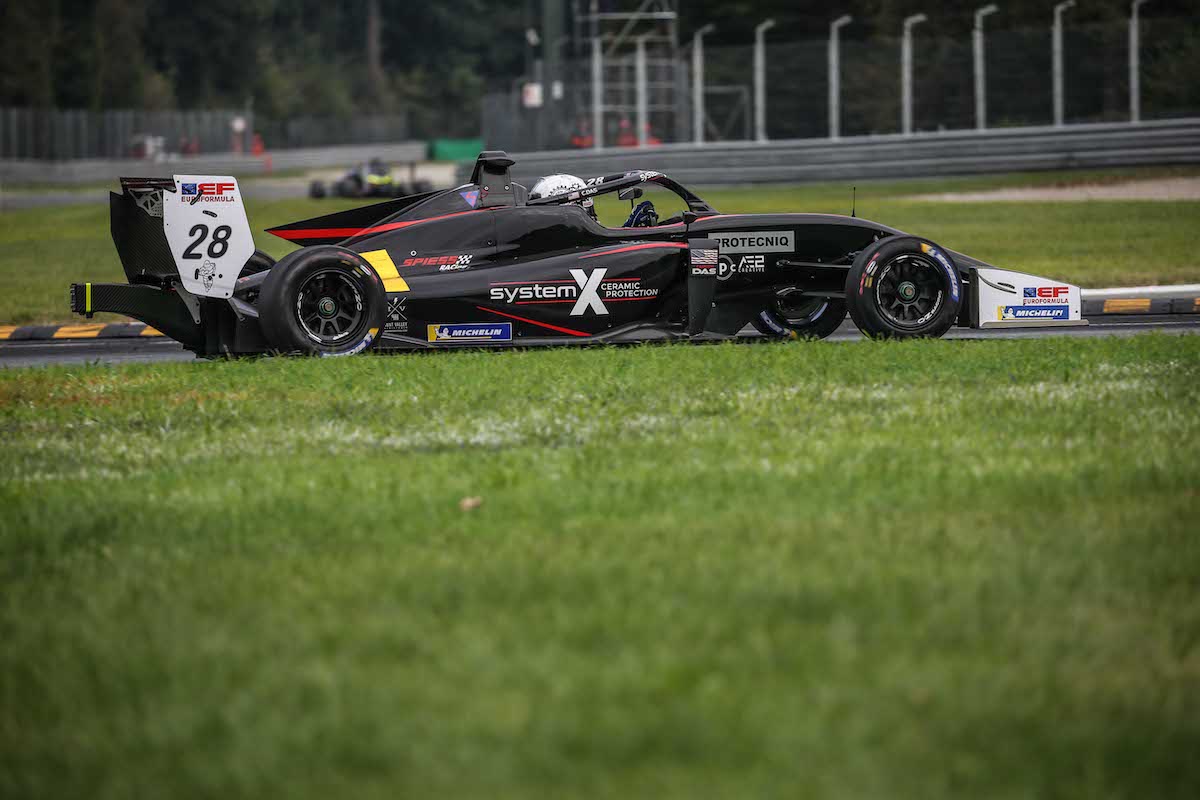 Motopark’s Cameron Das took full advantage of his title rival Louis Foster being taken out of the race as he fought hard to win the first race of the Euroformula weekend at Monza.

CryptoTower Racing driver Foster was a passenger in a chaotic opening lap of the race, finding himself rear-ended by the Motopark car of Reshad de Gerus, who was given a drive-through penalty for his misdemeanour.

De Gerus locked up into the first corner following contact between Christian Mansell and Carlin’s Enzo Trulli, which left the Italian with a puncture that ruled him out of contention for the race.

Das did not have it all his own way, however. The championship leader was pushed all the way by his new team-mate Mansell, a big beneficiary from the lap one chaos as he rose to second from fifth by the time the safety car was called out while Foster’s car was recovered.

The returning Australian temporarily took the lead of the race, faking to the outside of his team-mate before swooping up the American’s inside at the Della Roggia chicane on the eighth lap.

Das managed to recapture the lead of the race only one lap later, passing Mansell on the inside at the Curva Grande and managing to complete the move before the next braking zone.

Mansell had to settle for second as he never got close enough to complete a move for first again, despite pressuring his team-mate throughout the closing stages.

Van Amersfoort Racing’s Cem Bolukbasi held off late pressure from Nazim Azman to complete the podium places, producing a brilliant drive from 10th on the grid.

The Turk overtook the CryptoTower Racing car of Filip Kaminiarz, who had initially risen from 12th to fourth, at the inside of the Curva Grande on the fourth lap.

He completed his charge to the podium with an overtake on Carlin’s Brad Benavides, before Azman ran wide pressuring the VAR driver for the last spot on the podium on the final lap, surviving a scary launch off a sausage kerb to keep fourth place.

Kaminiarz eventually settled in fifth after his excellent start to the race, ahead of VAR’s Casper Stevenson in sixth.

Both drivers benefitted from Benavides – who ran in the podium places in the early stages of the race – running wide on the final lap trying to overtake Azman ahead of him.

Nico Pino finished behind the American in eighth, as he produced a solid drive on debut for Drivex School.

Francesco Simonazzi, who looked as though he wouldn’t even make the start in the returning BVM Racing car, finished in ninth. The issues from the earlier qualifying session appeared to have ruled him out of contention, but the early safety car enabled the Italian to rejoin at the back of the field.

The points-paying positions were completed by Drivex School’s Enzo Scionti, who was left unthreatened by de Gerus, Double R Racing’s Josh Mason, and Trulli behind, as the three drivers all experienced trips to the pits with damage.