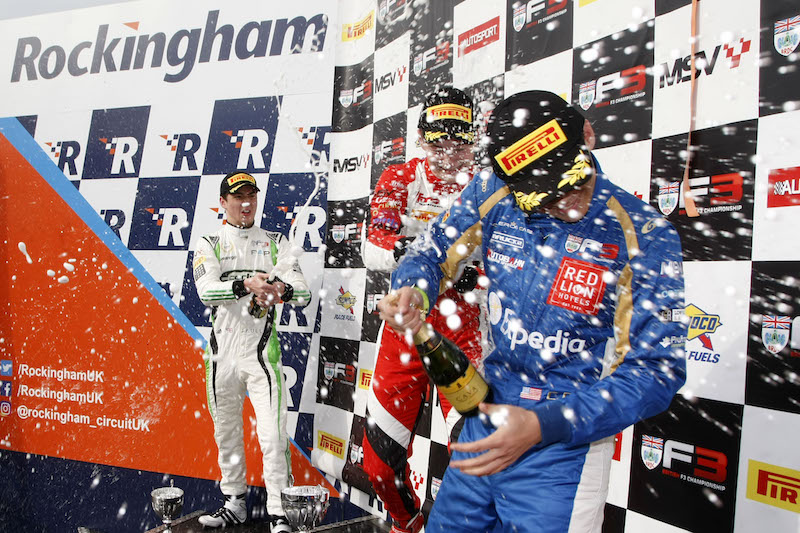 Cameron Das and Ben Hingeley scored maiden BRDC British Formula 3 wins on Sunday at Rockingham to carve into the lead of the previously-dominant Enaam Ahmed, who twice finished eighth after first-lap adventures.

Das came from alongside Ahmed on the fourth row of the reversed-grid to win race two, steering his way up to third on an?opening lap?in which pole-sitter Jamie Chadwick – having been passed by Omar Ismail – clipped James Pull, who collected Nicolai Kjaergaard.

Das took second away from?Chadwick around the outside at the same point?- the Turn 2 Deene hairpin – two laps later, and claimed the lead down the inside of Ismail after two further?tours.

From there, the US Formula 4 champion pulled away to win by 6.4 seconds.

Chadwick scooped a maiden podium in her second single-seater event, with punishment for the first-lap contact coming in the form of a five-place grid penalty for race three.

Hingeley was fourth in front of Callan O’Keeffe, Toby Sowery and Harry Hayek, with Ahmed eighth having dropped to 14th when he got?stuck on the outside of the opening-lap incident.

Fastest lap gave Das pole for race three, and he retained?the lead at first in front of fellow front-row starter Hingeley, before lap-two contact between Hayek and Kjaergaard brought out the safety car.

At the restart, Hingeley grabbed the lead down the inside of Das at Deene, and Pull went around the outside of his Carlin team-mate to take second.

The safety car came back out a lap later after Ismail was turned around by Manuel Maldonado, who was later excluded for “driving in a manner not compatible with safety”.

After the restart, Fortec’s Hingeley held off Pull to win by?0.987s with Das completing the podium.

Sowery jumped O’Keeffe at the first restart to take fourth, with Jeremy Wahome and Chase Owen scoring their best-yet results in sixth and seventh respectively.

Deene was Ahmed’s undoing again, taking to the grass and falling towards the back after trying to challenge Pull around the outside on the first lap, before recovering to eighth once again.

The 17-year-old’s lead over Das came down from 38 points at the start of the day to 15 by?the end, with Hingeley a further seven back.