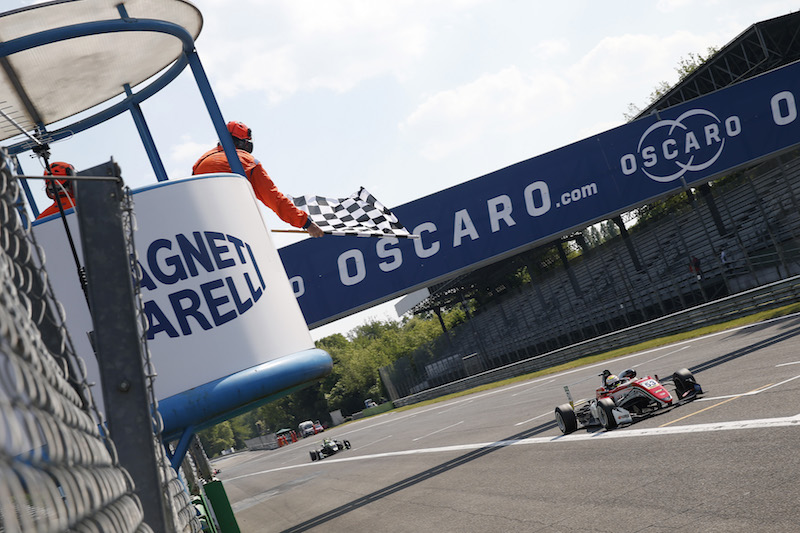 Eriksson started from pole, after having a deleted qualifying lap reinstated, ahead of Norris, Ilott and Guan Yu Zhou.

That order last a few seconds at the start, as another slow start for Norris, combined with a superb one from Ilott, led to the latter taking the lead and Mclaren junior Norris dropping to fourth.

Norris then fell?to fifth behind Maximilian Gunther, but didn?t lose momentum and quickly regained the place. Erikkson had lost momentum though, having been overtaken by Zhou, and was disposed of by Norris at Parabolica.

The trio swapped places as Ilott pulled out a crucial lead up front. In the first two races Norris had overcome his poor starts to chase down leaders, resulting in a late race one win.

Norris made his move at Lesmo 1 on the fourth lap of 20, and started to nibble into Ilott?s lead. Ilott could respond though, and he did not let the gap between them drop below a second until the very end of the race.

Eriksson took four laps to hunt down and overtake Zhou, but only held third for three laps as Gunther had kept to his gearbox throughout and pulled off an imperious move on the run to the della Roggia chicane on the 11th lap for the final podium position.

Their battle continued for several laps until an optimistic on-the-grass move by Eriksson at the start of Lap 16 led to a trip down the escape road and a frustrating fourth place for the Swede.

Ferdinand Habsburg remarkably spent most of the race alone on track, but got to within seven tenths of Eriksson at the finish to round off a great weekend for the Austrian.

Sixth place could?ve gone to anyone, with the train of cars fighting for position stretching back to 12th place for some durations. Mick Schumacher ultimately prevailed, with Pedro Piquet a surprise seventh after a messy race.

Ralf Aron finished eighth after battles with half the field, ahead of Jehan Daruvala (who had dropped down the order early on) and Zhou.

Despite a double podium for Prema with Ilott and Gunther, Zhou?s descent down the order was a repeat of the struggles the team suffered in the first two races.

Jakes Dennis and Hughes collided at the beginning of the race, leading to both retiring.