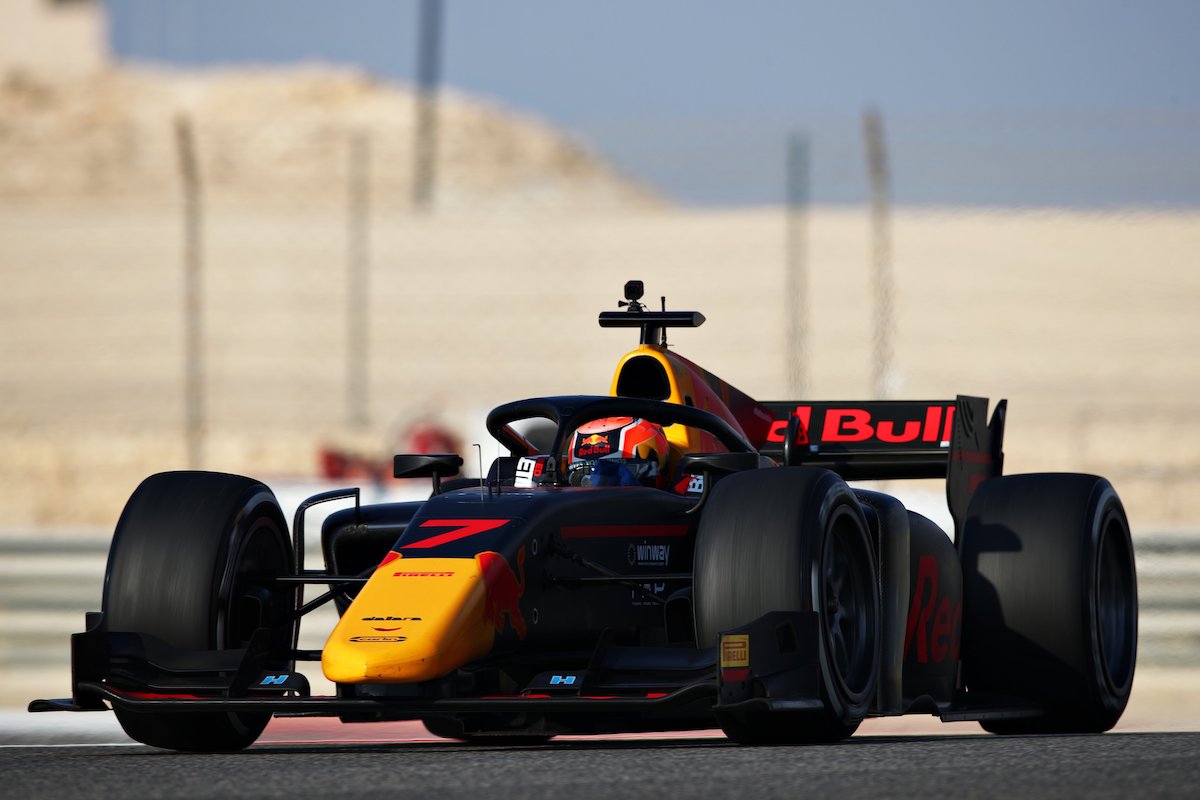 Jehan Daruvala led Carlin team-mate Dan Ticktum at the top of the times on the first day of Formula 2’s post-season Bahrain test.

A lack of fire marshals present at the circuit meant the start of the test was delayed from 0900 local time to 1330, and with on-track action reduced from two three-hour sessions to a single five-hour period.

Prema’s FIA Formula 3 champion Oscar Piastri was the first to a set a sub-2m00s lap, but it wasn’t until 15 minutes in that a driver set a flying lap.

This honour went to Piastri’s F3 title rival Logan Sargeant, driving for Campos Racing, with F2 title runner-up Callum Ilott getting closest for his 2019 team Charouz Racing System before the first red flag of the day.

Action was back underway at the 40-minute mark, at which point MP Motorsport’s F3 graduate Lirim Zendeli went top. He was quickly bettered by Ilott, whose first place was then protected by another red flag stoppage.

Zendeli’s team-mate Louis Deletraz went second fastest shortly after the restart, a position he held for a quarter of an hour before Daruvala rose up to second.

Daruvala – switching to Carlin’s #7 car raced by Yuki Tsunoda this season – and Ticktum improved to go one-two before the third red flag of the session.

Approaching the middle of the day’s running, Piastri returned to the top, and it was only after that did Hitech GP’s Red Bull juniors Juri Vips and Liam Lawson go for their first flying laps.

Virtuosi Racing’s Guanyu Zhou waited even longer, only lapping at speed after three hours, and his new team-mate Felipe Drugovich remained half a minute off the pace until his first effort an hour after that.

Between then there was another red flag, with Deletraz going fastest just before the flags were flown.

In the final hour the laptimes started to drop, and Daruvala and Ticktum made their way back to the top.

There was a final red flag with 20 minutes to go, and the interruption meant there were scant improvements in the final few minutes. Carlin’s drivers remained at the top, while Drugovich and ART Grand Prix’s Christian Lundgaard jumped into the bottom spots within the top 10.

Piastri ended up as the top debutant in fifth, outpacing Ilott, while ex-Formula 1 driver Roberto Merhi was 2.331 seconds off the pace for HWA Racelab in 21st place.