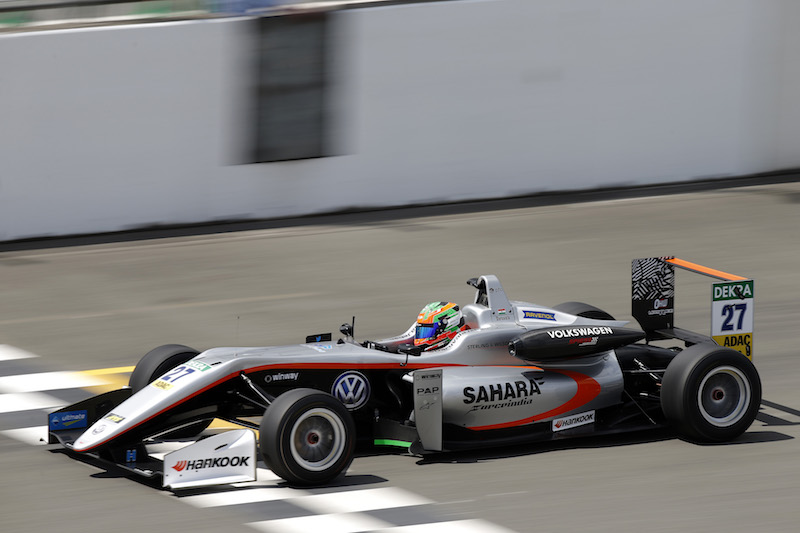 Chasing him all the way from lights to flag was Maximilian Gunther, but Gunther couldn?t force a mistake and had to settle for second and an increased championship lead.

Daruvala snatched the lead of the race on the run to the first corner, when Gunther fell back behind Ralf Aron.

Gunther retook second at the first corner, but couldn?t find a way past Daruvala.

Throughout the race, he remained about half a second behind the Carlin driver, never quite close enough to make a move. Daruvala completed perfect lap after perfect lap, leaving Gunther with no chance to retake the race lead.

Second meant Gunther extended his lead at the top of the championship to 34 points. Daruvala?s race win promotes him to fifth in the overall championship, though he remains second in the rookie competition.

Luckily for Gunther, he didn?t have to worry about Aron trying to challenge for second. The HitechGP fell away from the leaders and began to build up a train with Jake Hughes and Lando Norris right behind him.

Hughes and Norris spent the majority of the race fighting amongst themselves. Lap after lap, Norris tried to pass Hughes around the outside of the hairpin, before finally taking the inside line and moving through to fourth.

He faced the same problem trying to pass Aron, again trying to find a way around the outside before switching to the inside line at the hairpin and taking third three laps before the end of the race. The gap to the race leaders was too much for Norris to close in such a short space of time and he crossed the line three seconds behind them.

The battles had allowed David Beckmann and Joel Eriksson to join the back of the battle. The Motopark pair were stuck battling with themselves, though, and couldn?t move forwards. Beckmann finished ahead of Eriksson in sixth.

The race was paused by full course yellow flags twice so marshals could clear cars. The first retirement was Mick Schumacher, who collided with Pedro Piquet at the start of the race.

Piquet was squeezed between the Prema Powerteam driver and the wall and hit the back of Schumacher?s car. Schumacher stopped on track, whilst Piquet returned to the pits to retire.

Tadasuke Makino was the next to retire on track. He locked up approaching a corner and hit the side of Harrison Newey. Newey was sent into a spin, but was able to rejoin the race at the back of the field. Makino continued into the run off area and out of the race.