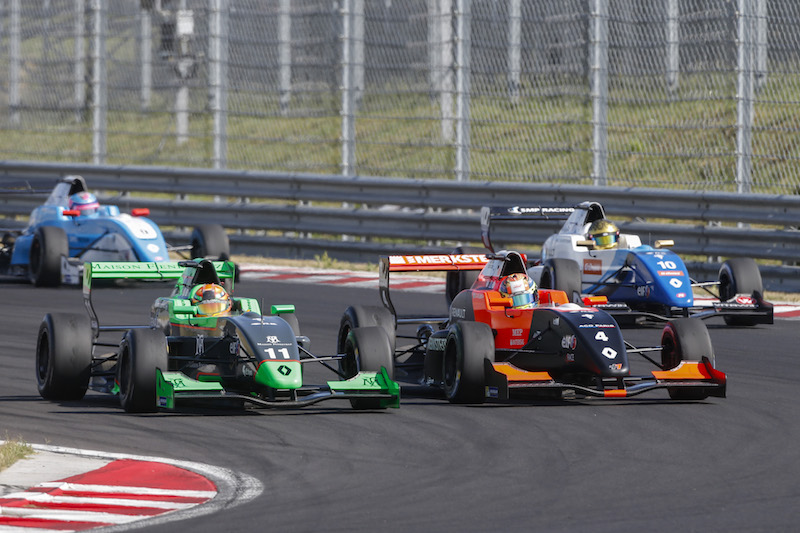 Gabriel Aubry followed his maiden Formula Renault Eurocup victory at the Hungaroring with a second in race three after Sacha Fenestraz lost a win to a penalty.

After getting ahead of Fenestraz at the start of race two, Tech 1 Racing’s Aubry this time maintained the lead from pole position, earned by setting the best second-fastest time in second qualifying.

At a restart with 16 of the 25 minutes remaining following a safety car, Fenestraz brilliantly snatched the lead down the inside of Turn 1, after former team-mate Aubry had moved to the middle of the road to try to defend.

However, the Franco-Argentine had already been handed a 10-second time penalty for a false start.

Once into the lead, Fenestraz quickly built a gap of 1.7 seconds, but Aubry soon began reeling him in again, and he crossed the finish line less than half a second behind.

Robert Shwartzman took second ahead of Max Defourny and Will Palmer, who retains the championship lead, five points ahead of Shwartzman.

Had Fenestraz won the race without his penalty, he would have taken the series lead by one point, but is instead 22 behind after being classified eighth.

Yifei Ye slipped back from his grid position of fourth to sixth on the opening lap, but he still took his best result to-date in fifth and his first rookie win – having been denied that honour in race two when Max Fewtrell overtook him.

Alexander Vartanyan completed his best weekend yet with sixth, while race one winner Dan Ticktum gained seventh by just 0.068s over Fenestraz, having picked up three places at the start.

Fewtrell went the other direction and fell to 11th at the start, but put passes on Jarno Opmeer and debutant Tom Randle to end up ninth.