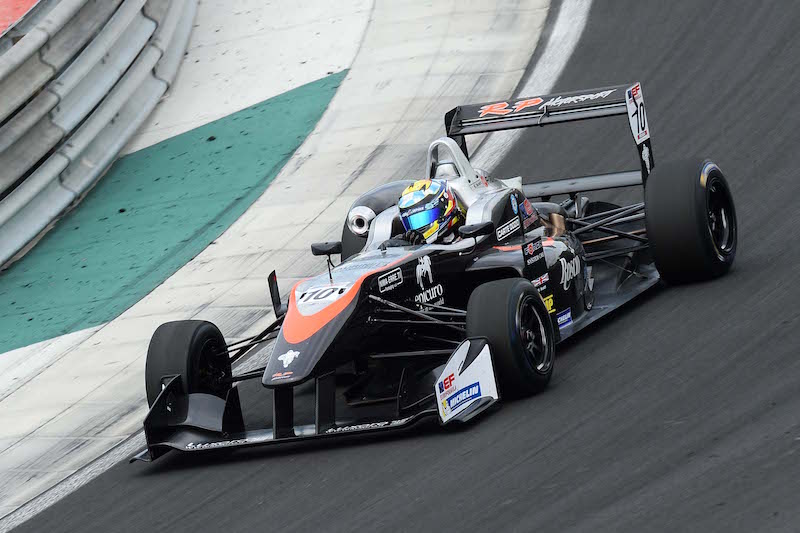 Normality resumed at the Hungaroring as Harrison Scott once again stood on the top step of the Euroformula Open podium in race two of the weekend.

After losing his race one pole and being consigned to ninth in the Saturday race, Scott had redemption when this time his pole lap stood, ahead of Nikita Troitskiy, debutant Raoul Hyman and Eliseo Martinez.

In a race devoid of overtaking, attention focused on the battle at the front between Scott and championship rival Troitskiy.

Once up front Scott has often been uncatchable this year, but at the Hungaroring building a lead was far more difficult, especially as rival Troitsky -whose Drivex car was put at the top of the timesheets by Jake Dennis in the pre-event test on Thursday- was more often than not quicker in the twisty second sector of the track.

Scott was the better of the two in the final sector though, always having enough of a gap going on to the pit straight to avoid Troitskiy benefiting from his slipstream.

In the closing laps Scott?s smooth style rewarded him as he increased his gap over Troitskiy and strolled across the line to claim his sixth win in eight races.

Troitskiy took his fourth runner-up finish and fastest lap, with debutant Hyman taking a podium and moving into the top ten in the standings despite having only competed in two races.

Devlin DeFrancesco was one of the pre-race favourites to be standing on the podium, but a poor start then led to him going onto the grass on the run to Turn 1 and spearing into Petru Florescu and Pedro Cardoso. DeFrancesco and Florescu were out on the spot.

Another incident further round the lap involving Lodovico Laurini and Jannes Fittje meant the safety car was called out till the end of lap three.

Track limits was an issue as well as many drivers were handed warning flags. The greatest offender was Cardoso, who ended up having nine seconds added to his race time for continuous violation of the rules.

Scott heads into the summer break with a 68 point championship, with the series returning to action at SIlverstone in early September.