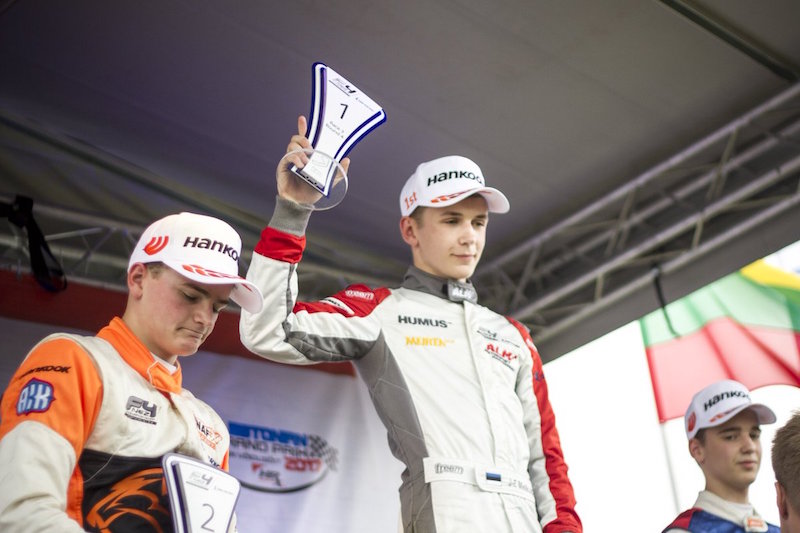 Jan-Erik Meikup took his first SMP Formula 4 NEZ victory in front of his home crowds in race three at Parnu.

The Estonian inherited the race lead when Christian Lundgaard stalled on the grid, but had to work hard to stay ahead of Bent Viscaal.

Starting from pole, Lundgaard was looking to continue his winning streak and extend his lead of the championship, but the MP Motorsport driver couldn?t get away from his starting position.

The majority of the field sped past him, but a number of drivers couldn?t avoid the stationary car. Lundgaard was struck multiple times, damaging the rear of the car and forcing him to retire.

Milen Ponomarenko and Juuso Puhakka, who made contact with Lundgaard, were also left stranded at turn one.

After a brief red flag and safety car period, Meikup started the race proper. A strong start saw him pull away from the rest of the field, but Viscaal soon set about closing the gap.

In the second half of the race the pair ran nose to tail and, with less than a minute on the clock, Viscaal pulled alongside Meikup.

Running side by side for a number of corners, Meikup just managed to stay ahead from Viscaal. He took the race win only half a second ahead of MP Motorsport driver.

The pair finished nearly three seconds ahead of the third place driver, helped by an early battle for the position between SMP Racing drivers Aleksandr Smolyar and Nikita Volegov.

After the race restarted, the pair ran side by side for three corners, with Smolyar just getting ahead of his team-mate. Volegov had the inside line going into the following corner and the two cars collided, Volegov sent speeding into the grassy infield and out of the battle. He was able to rejoin the race at the back of the order.

Smolyar was able to keep third position and set about catching the leaders, who were now more than four seconds down the road. He couldn?t close the gap in time, but finished a comfortable third, ahead of the battling Tuomas Haapalainen and Mikhail Belov.

Lloveras had started sixth on the grid and was looking to close the gap to Lundgaard after the points leader?s retirement. He was fifth on the restart, but fell back to seventh in the opening few laps. He worked hard to try and find a way past Piirimagi, but eventually had to settle for seventh. He leaves Parnu just eight points behind Lundgaard.

Lloveras team-mate Guillem Pejeu followed him across the line in eighth, ahead of Ivan Berets and Elias Niskanen.