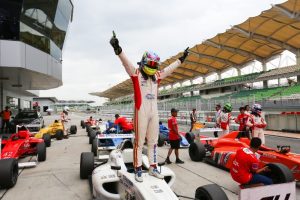 Daniel Cao finally won the 2017-18 Formula 4 South East Asia title in the rescheduled fifth and final round of the season at Sepang.

Cao looked to have been crowned champion at the previous round in Malaysia, but another round was added at the former Formula 1 track to ensure the championship ran to five rounds.

There had been set to be a round at Sentul in Indonesia in late November, but ?logistical complications? meant it failed to go ahead and was rescheduled for early December at Buriram. That also failed to take place, and it looked like the championship would only have run to four rounds.

With a 119 point lead over Thai Kane Shepherd, and with 159 points available in the six races at Sepang, the title was all but assured for the Chinese driver anyway.

Cao started the weekend with pole, extending his lead by three points, but saw it reduced by six in the first race after being jumped by Shepherd.

Shepherd took the lead into Turn 1, and the wet weather that had hit the circuit meant it was only a few moments before the safety car was out.

When racing resumed Cao was all over Shepherd but could not find a way past, and had to do with second place and fastest lap.

Hibiki Taira ran most of the race in third, and could not match the pace of the top two. The Japanese driver was fastest in qualifying, but a technical infringement dropped him to fourth. He rose to third at the start of the race, but was under intense pressure from Frenchman Alessandro Ghiretti and Malaysian Muizz Musyaffa, and eventually finished behind both.

Fastest lap for Cao meant he started the second race from pole, which he dominated to take the title. Inaugural F4 SEA champion Presley Martono finished second, with Ghiretti just beating Isyraf Danish and Shepherd to the last spot on the podium.

Shepherd struck back in the third race to take his fourth win of the season, with Ghiretti and Martono completing the podium.

Nazim Azman finished ninth and took the fastest lap, with the Malaysian trying to gather enough points to overtake the absent Ugo de Wilde for third in the standings.

Ghiretti took his first single-seater win in the fourth race, with Musyaffa and Martono and Taira all within a second of the winner.

Martono bought his career F4 SEA win tally to 10 in the fifth encounter, sharing the win record with Cao, with Ghiretti and Azman second and third in the race and putting Azman equal on points with de Wilde.

Musyaffa won the final race of the season, launching himself into the top 10 in the standings. Sixth for Azman meant he secured third in the championship, while fourth for Shepherd brought the end gap to Cao down to 116 points.