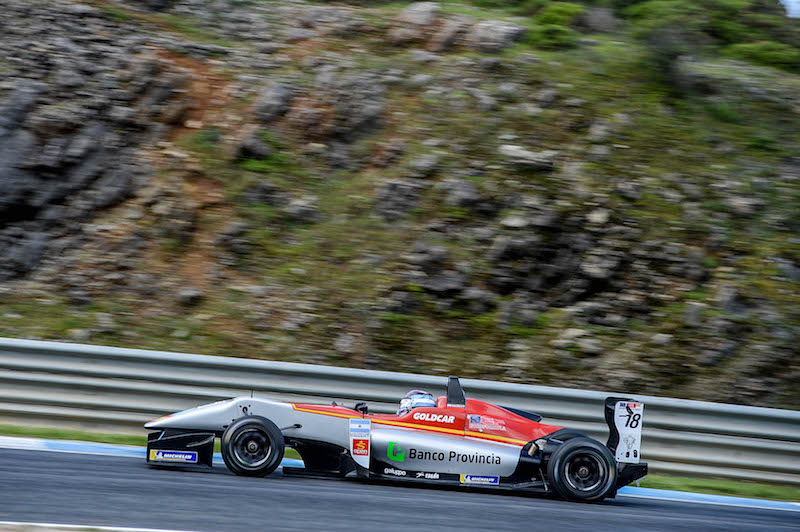 Marcos Siebert held off a rapid Felipe Drugovich on the final lap to win the second Euroformula Open race at a damp Estoril.

The Campos Racing driver started the race in second and was kept behind by polesitter Petru Florescu, but on Florescu made a mistake on lap 7 of 19 which Siebert was able to capitalise on to take the lead.

RP Motorsport driver Drugovich?was involved in a three-car battle for third in the opening part of the race with Jannes Fittje and Cameron Das, with the trio three-wide heading down the main straight at the end of the opening lap.

Drugovich?was able to pick up the pace, taking second place from Florescu half-way through the race before closing a four-second gap to Siebert.

On the final lap, Drugovich?was close enough to attack Siebert, who had to aggressively defend to keep his rival behind to take victory.

Polesitter Florescu slipped down to fifth by the end of the race, with Teo Martin Motorsport’s Bent Viscaal taking the final spot on the podium.

Jannes Fittje and his two Drivex School team-mates,?Lukas Dunner and Christian Hahn, were all given a five-second time penalty due to an issue before the race. Fittje was just able to hold on to fourth position over Florescu, with 0.135s separating the pair after the penalty was added.

Dunner dropped to 12th from 10th, while Hahn was the only driver to retire from the race when he came into the pits early in the race.

The Carlin pair of Cameron Das and Matheus Iorio finished the race in sixth and seventh, separated by just under one second.

The final three places in the top 10 were all taken up by RP Motorsport. Guilherme Samaia and Alex Karkosik were separated by 0.282s when they crossed the line in eighth and ninth, while Aldo Festante inherited 10th after Dunner’s penalty.

Their team-mate Michael Benyahia was in the mix for a top 10 finish in the opening half of the race, but dropped down the order and finished 13th.