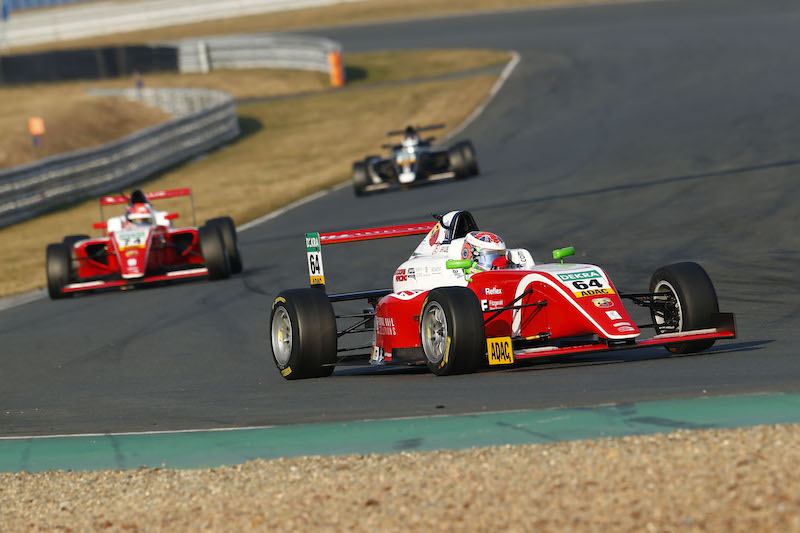 Olli Caldwell led Enzo Fittipaldi in a Prema one-two in the third and final ADAC Formula 4 race at the Oschersleben season opener.

Caldwell, who started on pole on the reversed grid, maintained the lead off the line and was unchallenged for the majority of the race.

After a brief safety car period at the end of lap one, Caldwell started to build up a lead to the rest of the field, eventually finishing three seconds ahead of team-mate Fittipaldi.

It was a much busier race for Fittipaldi, who spent the first half of it battling with Gianluca Petecof and Charles Weerts for fourth.

Petecof, who was leading the three way fight, managed to pull away from Weerts and Fittipaldi in the second half of the race and began to challenge Andreas Estner for the final podium position. The pair came together as Petecof tried to pull alongside and Estner was sent into a spin and out of the race.

The incident promoted Fittipaldi to the final podium position, behind KDC Racing driver Leonardo Lorandi. In the closing laps, the Prema driver managed to reel in Lorandi, and the pair ran side by side for a number of corners before Fittipaldi managed to make a move around the outside to take second.

Lorandi then came under pressure from Weerts on the final lap, the pair taking the chequered flag almost simultaneously, but it was Lorandi who finished third. The KDC driver was then handed a 30 second penalty for pushing another car wide, dropping him down to P14.

Weerts picked up the final podium position, ahead of team-mate Frederik Vesti, who he spent most of the second part of the race fighting with.

The safety car only made one appearance, despite multiple collisions and standard cars. It came at the start of lap two, when Ido Cohen mounted the back of Aaron di Comberti and was sent into the gravel. Cohen couldn?t get his car moving, but di Comberti was able to make it back to the pits, albeit missing his rear wing.

David Schumacher and Tom Beckhauser were also caught up in an incident not long after the safety car returned to the pits.

Ahead of them, three cars were battling for position at the back end of the top 10 when Joey Alders and Leon Kohler briefly touched.

Lirim Zendeli, who won both races yesterday, was also taken out when another car clipped his right rear wheel and he was sent into a barrier.

Rookie Niklas Krutten managed to avoid the drama to take P5, ahead of Alders and Mick Wishofer.