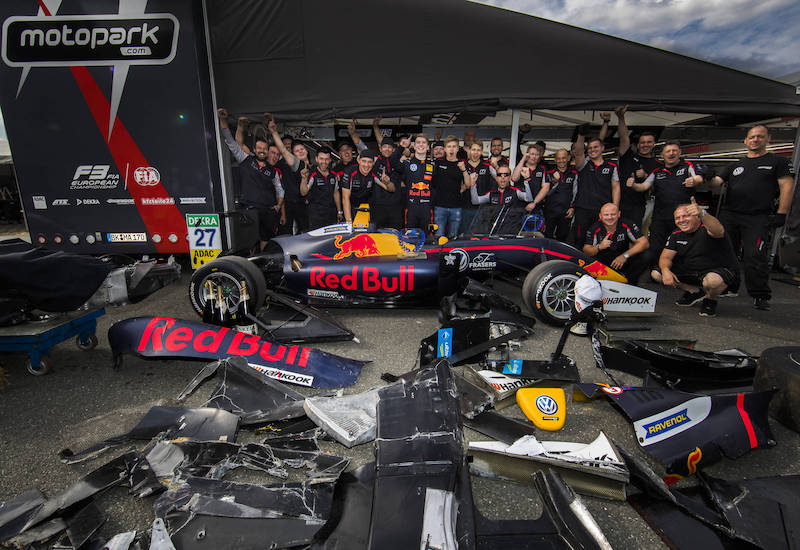 Dan Ticktum paid tribute to the effort of his Motopark team for repairing his Formula 3 European Championship car in time for him to win the third race at the Norisring, following his horror crash earlier in the day.

The Red Bull junior’s car was badly damaged in a start-line crash in race two, where Ameya Vaidyanathan smashed into it at high speed after Ticktum had stalled.

Ticktum visited hospital before being cleared to race in the finale, where he drove his rebuilt car to victory from third on the grid, holding off team-mate and race two winner Juri Vips by 0.057 seconds.

The win moved Ticktum to just one point adrift of championship leader Marcus Armstrong, who had started on pole.

“The first thing after the crash was making sure I was alright,” he said.

“I knew pretty soon I?d probably be OK. I still have quite a big headache, but apart from that the neck and everything was pretty much OK after about one hour.

“When I was going to the ambulance I saw my car going past on the truck and I thought ?that?s probably not going out for race three?.

“I got to the hospital and I had a text to say that the engine and gearbox was already going on.

“I’m just speechless really at how quickly the team managed to turn that car around.

“Even for me to get on the grid to pick up any points was special enough but to have a car that?s competitive enough to win is very good. Unbelievable, a big, big thank you to them.”

The FIA has been asked to assess whether Vaidyanathan “meets the standard required” to race in European F3 following the incident with Ticktum.

Vaidyanathan, who finished fourth in Euroformula Open last year but is yet to score a point in European F3, was excluded from the race two results and the remainder of the weekend, although his Carlin team stated that his car was too badly damaged for him to be able to race. Like Ticktum, he visited hospital but was soon cleared.

A statement from the Norisring stewards quoted by Autosport said: “The stewards request that the FIA review this incident and the driver standard of Ameya Vaidyanathan.

“The stewards request that the FIA consider whether the driver meets the standard of ability and awareness required to compete in this championship.

“The driver advised the stewards that he followed his normal start procedure. He was looking to his left where another car was trying to overtake him.

Ticktum, who admitted that stalling was his mistake, said Vaidyanathan’s failure to see him was ‘pretty dreadful’.

“He said he was looking at the car on the left,” Ticktum said. “I can sort of understand this but at the start you?re always supposed to be looking forward and the other cars should be in your peripheral vision.

“I think he had eight rows of [grid] boxes to see me, so pretty dreadful really, I have to say, but I?m glad he?s OK as well. We?re all fine, and life is more important.”