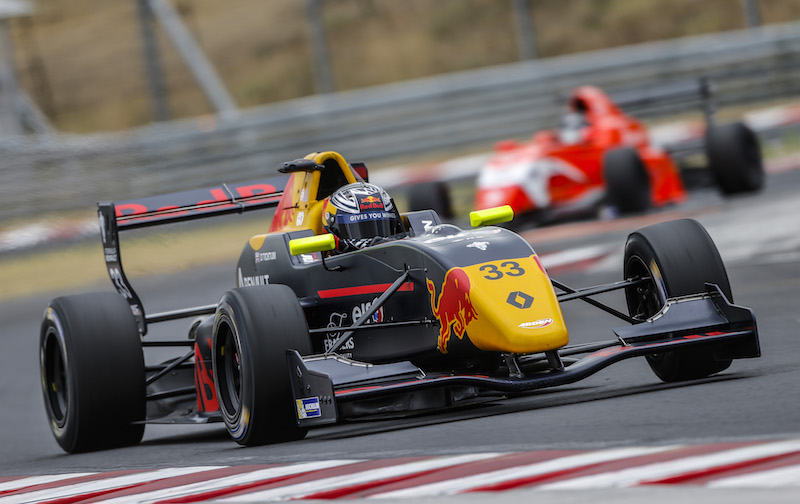 Dan Ticktum claimed his first Formula Renault Eurocup win in the opening race of three at the Hungaroring.

The first-year Red Bull Junior had claimed pole position in a wet qualifying session, but managed to stay out front in the hot and dry conditions of the race, keeping Sacha Fenestraz at bay.

Fenestraz, the pace-setter in the dry this week, made the slightly better start from second on the grid and alongside Ticktum through the first corner and into Turn 2, where the Briton used the inside line to seal the lead.

Ticktum had to deal with two safety car restarts, the first after a spectacular crash for Luis Leeds deep in the pack at Turn 2 on lap two, the second after eighth-placed Thomas Maxwell braked late at the first corner at the restart and hit Alex Peroni, who in turn was knocked into Richard Verschoor.

The second restart came with seven minutes and a lap remaining, and a lap later Fenestraz had a look to the inside of Ticktum, with his brakes locked.

Ticktum stayed ahead though, and posted a fastest lap on the penultimate tour to win by just under a second as he delivered Arden a win in its debut Formula Renault campaign.

Second for Fenestraz was a boost for his championship ambitions, cutting his gap to the leader Will Palmer from 29 to 11 points.

While Ticktum will start further back in the remaining two races after falling foul of strict track-limit policing in the second qualifying session, Fenetsraz will begin from pole and then second.

Starting at the back of the grid after electrical issues in qualifying, Palmer made progress at the start only to fall to the back again with the same issue under the second safety car, and he came home 19th.

From 11th on the grid, Robert Shwartzman finished seventh, bringing him to within three points of Palmer.

There would have been double cheer for Red Bull chief Helmut Marko with Neil Verhagen notching up his maiden podium, getting up to fourth on the first lap and passing Gabriel Aubry for third on the first restart before keeping the Tech 1 driver at bay until the end.

Alexander Vartanyan claimed his best result to-date in fifth, with Henrique Chaves in sixth from 13th on the grid.

Jarno Opmeer and Zane Goddard ended their waits for points in eighth and ninth, with Yifei Ye 10th.

Max Defourny finished down in 15th having started fifth, caught up in contact at the first corner with Maxwell.

Up ahead, debuting Toyota Racing Series champion Thomas Randle took third away from Aubry, but perhaps not without contact, as he soon pitted with damage.