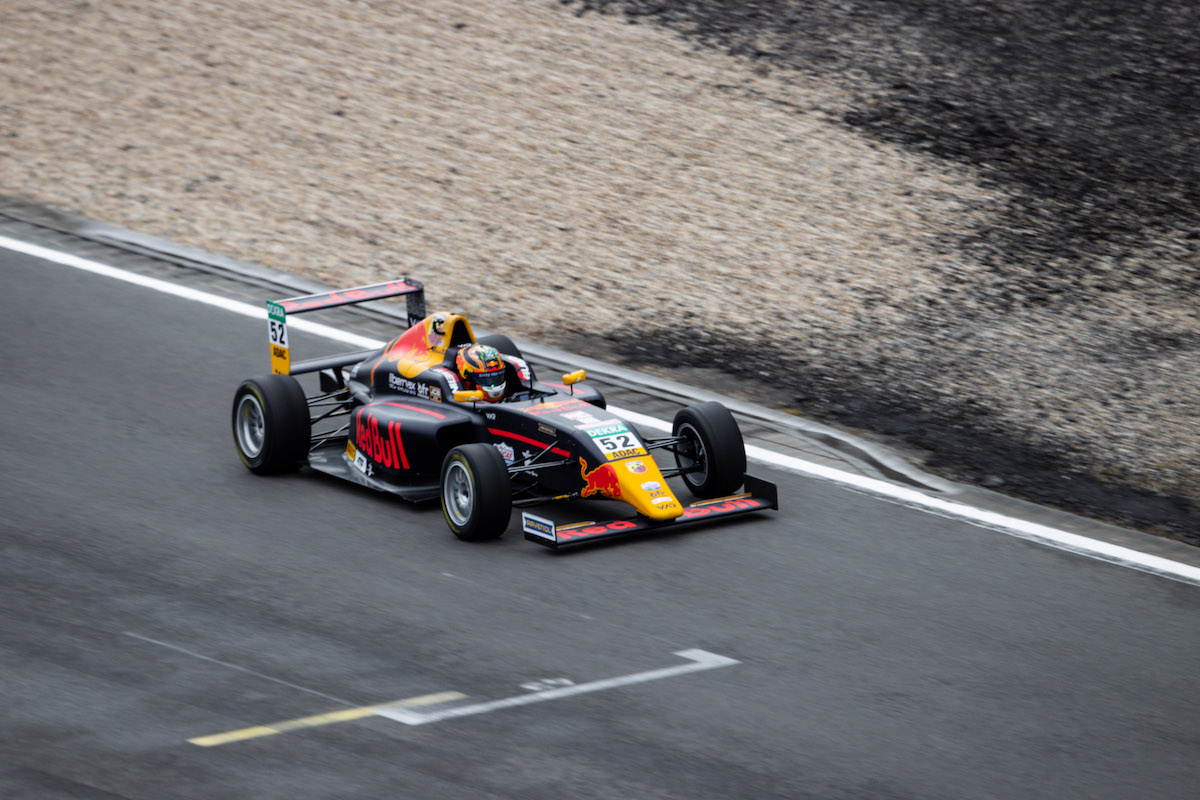 Red Bull junior Jak Crawford survived late rainfall to clinch his first ADAC Formula 4 win at the Nurburgring in the opening race of the 24-hour weekend.

Crawford, who took his maiden European single-seater victory in the last Italian F4 round at the Red Bull Ring, made a great start from pole position while his championship-leading team-mate Jonny Edgar had a poor getaway.

Van Amersfoort Racing’s third driver Francesco Pizzi moved up into second place at the start while Joshua Duerksen climbed from seventh to third – after a grid penalty for colliding with Crawford at Hockenheim last weekend prevented him from starting on the front row.

Crawford initially made a gap of around a second on Pizzi but it didn’t last long and the front three were soon running nose-to-tail.

Duerksen dropped back in the middle of the race while Crawford and Pizzi fought over the lead, but then quickly caught up again and attacked Pizzi into the Turn 1/2 chicane with less than 10 minutes remaining.

Mucke Motorsport’s Duerksen went around the outside of Pizzi in the subsequent left-hander and finally completed the move heading into the Schumacher S.

Their battle allowed Crawford to move 2.2 seconds clear at the front, but Duerksen soon reeled the leader in as rain began to fall in the final minutes.

After R-ace GP team-mates Kirill Smal and Artem Lobanenko collided – causing Smal to pull over with damage – the safety car came out and allowed Crawford to take the chequered flag.

Having fallen to fourth at the start, Edgar was unable to keep up with the front three drivers and found himself under attack instead from US Racing rookie Tim Tramnitz.

The rain however allowed Edgar to snatch third from Pizzi, who also lost out to Tramnitz and finished fifth.

Victor Bernier skated off at the hairpin in the rain, costing him the sixth place he had taken away from Ollie Bearman. Vlad Lomko, Josef Knopp and Erick Zuniga rounded out the top 10.

Elias Seppanen, who had been second to Edgar in the championship coming into the weekend, pitted after a technical issue at the start.