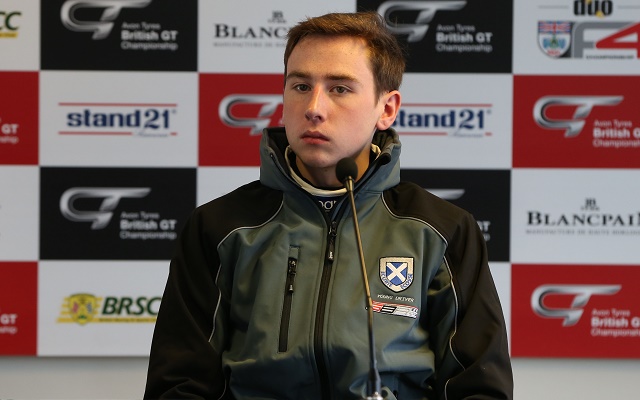 Of the 20 guys taking to the track in BRDC F4 cars at Snetterton this past weekend, quite a few managed standout performances.

There was Omar Ismail, delivering a confident win from pole in just his second round in car racing. His teammate Tom Jackson then stunned the field with a slicks gamble to win from 16th on Saturday, while Jack Bartholomew took his first podium after starting dead last. Or how about points leader Will Palmer, bouncing back from a tough second race to dominate the wet-weather finale and extend his points lead?

Yet, in the wet, it was hard to look past the performances of Ecurie Ecosse’s Ciaran Haggerty. The Scotsman led half of the second race on a drying track, albeit front tyre degradation eventually resigned him to fourth ? a result he admitted was ?difficult to take?.

But he kept at it, going from 14th on the grid in the finale to sixth on the opening lap and eventually fighting his way through to third place.

Ask him about his ability in the wet, however, for this is not the first time this season Haggerty has impressed in mixed conditions, and you’ll hear him play it down. ?I just seem to get good starts,? he said. ?It just seems to work out for me over the first lap ? just in the right place at the right time. And obviously the car’s really good in the wet, have to thank the team for that.?

There was quite a lot of fanfare back when, two weeks before the start of the season, Haggerty and Graham Bunton Racing officially joined BRDC F4, with patronage from both British GT squad Ecurie Ecosse and IndyCar legend Dario Franchitti. But even by himself, Haggerty ? who’d won 11 races in a row to secure his 2014 Scottish Formula Ford 1600 title ? was well-deserving of the headlines.

Still, it was always going to be a big switch, even though Haggerty says that the FF1600 cards were actually harder to drive – ?the F4 car is like on rails?. The plucky single-car team was unlikely to challenge the established likes of Lanan and HHC early on and the Scotsman admits he just wanted to be in the top ten and get a podium.

He was surprised to have ticked off the latter box in just his second race in BRDC F4, finishing just half a second behind the winner. And as for the former goal, him and Graham Bunton Racing are well on track. 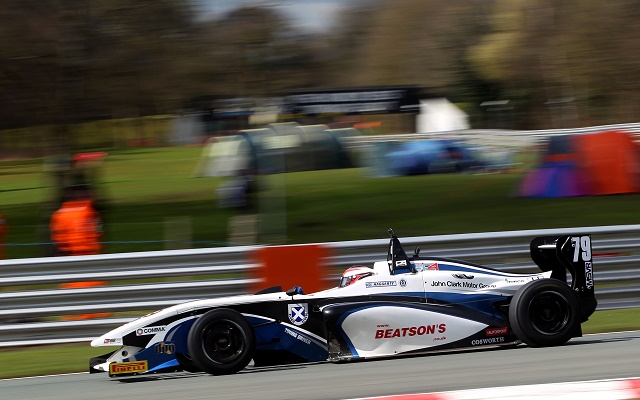 However, Haggerty did state it’s been an ?up and down? year ? the ?down? referring to the second outing at Rockingham, which he describes as ?probably one of the worst weekends he’s ever had?. He’d earned just eight points in that one, although that stat does not convey the part where he’d gone from from 13th on the race two grid to second, only to retire after contact with Jackson.

?I came back the next round stronger, just done my best,? Haggerty said, his first race of round three at Silverstone yielding second place. ?We’ve been clawing our way back up, hopefully we can run at the front towards the end of the season and move up in the championship a wee bit as well.?

The ‘top ten’ goal should now seem a distant memory ? Haggerty is seventh in the standings, just 13 away from fourth place.

But what of the future for the young Scotsman? Haggerty admitted that the budget has been ?tight? and that they’ve been taking it a year at a time. However, he does have a ?dream? goal ? going to America, to race in IndyCar.

While his mentor Franchitti, a four-time champion in the series, has certainly been a factor in that, he’s not the only reason. ?I enjoy the racing there a bit more,? Haggerty said. ?I like the look of the tracks ? proper drivers’ tracks over there. Like Barber, that one’s great.

?It’s got a mixture of ovals, street circuits, road courses, it’s really good. I don’t see why it doesn’t appeal to more people over in Europe.

?And the route to IndyCar is a lot more structured. A lot clearer – much more clearer paths, whereas over here, after this, you can go to Formula Renault, F3, GP3. Lots of different routes and it really depends on your luck – whether you choose the right route at the right time. Over there it’s one ladder, straight up.?

Should IndyCar not pan out, Haggerty said he’d be happy just to ?make a career out of racing, whatever that racing is.?

For now, though, he’s focussed on BRDC F4. He’s hit his marks so far ? and although the first win continues to elude him, he’s not torn up about it. ?If we have a couple more close ones, I’ll be quite disappointed,? Haggerty said. ?But I’m happy right now.? 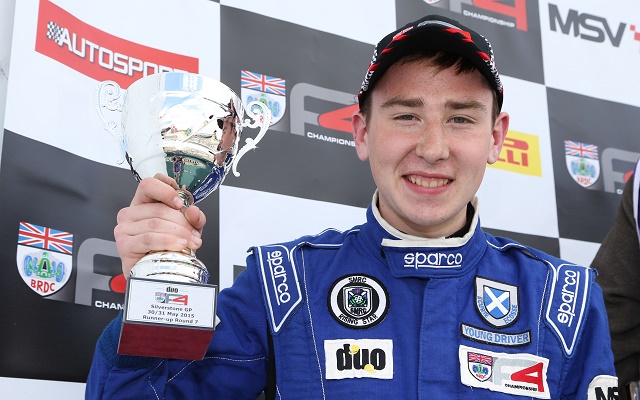