written by Bethonie Waring 1 May 2018 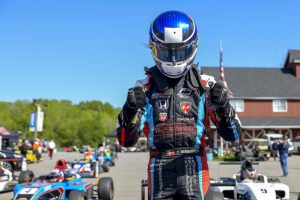 Christian Rasmussen shone in the opening round of the 2018 United States Formula 4 championship, beating the track record on his way to a commanding lead at the top of the standings.

After narrowing missing out on a victory in the opening race of the weekend, Rasmussen took lights to flag wins in the second and third races to build a 20 point gap at the top of the drivers? championship.

The Jay Howard?s Motorsports Driver Development driver started from the second row of the grid for race one, but jumped up to second off the line. He immediately began to challenge pole sitter Benjamin Pedersen and, after a brief caution period caused by Kaylen Frederick?s stranded car, moved into the lead.

Pedersen tried to fight back and stayed close to Rasmussen throughout the race as he searched for a way past. The move came on the final lap, when Pedersen took Rasmussen in the same place Rasmussen had taken the race lead earlier.

DC Autosport?s Dakota Dickerson finished third after a storming drive up from seventh on the grid, ahead of Joshua Car and Austin Kaszuba.

Jose Blanco-Chock and James Raven, who started from the pit lane, finished sixth and seventh.

Race two was a simpler affair for Rasmussen. The Dane took the lead off the line while pole sitter Teddy Wilson was shuffled down to fifth.

A safety car, this time caused by F1600 champion Matthew Cowley, bunched up the field, but Rasmussen managed a strong restart to pull away from Dickerson. He spent the remainder of the race setting fastest laps, setting a new track record in the process, and finished almost six seconds ahead of second place.

Dickerson was able to pull away from Pedersen in third as the race one winner battled with Wilson. Wilson eventually got the upper hand in the closing stages of the race to take the final step of the podium.

Jacob Loomis made a strong start to climb up to fifth, ahead of Car.

At the back end of the top 10, Jacob Abel just held onto seventh ahead of Raven and Wyatt Brichacek.

It was more of the same for Rasmussen in race three. This time without any early safety car to hinder his progress, he immediately set about setting fastest laps ? breaking the track record again ? to build a gap while Raven, Brichacek, Dickerson, Pendersen, and Wilson all squabbled for position.

Raven initially took second but ran wide and plummeted down the order, promoting Brichacek to the runner up position.

Wilson pushed Brichacek hard and the pair swapped positions a number of times before the American went off at Hog Pen corner and fell down to 16th.

Wilson was able to slightly close the gap to Rasmussen but came under pressure from Dickerson in the closing stages of the race. He finished 8.5s behind the race winner and just 0.2s ahead of Dickerson.

Car finished best of the rest after passing Pendersen in the closing stages of the race. Kaszuba took sixth ahead of Abel and Braden Eves.