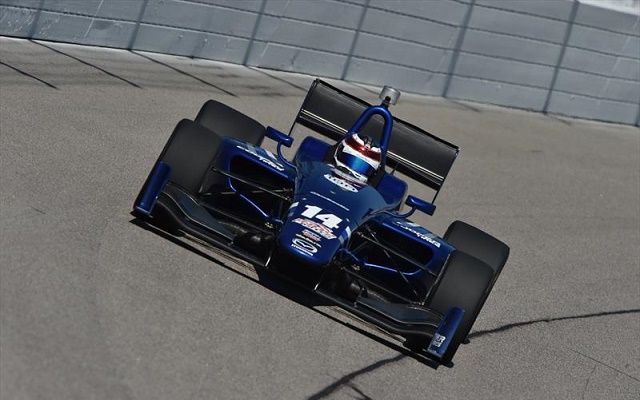 Carlin’s Max Chilton managed to convert his first pole in Indy Lights into a maiden victory, narrowly prevailing in a close fight against teammate Ed Jones at Iowa.

As the green flag waved, Chilton and Jones successfully retained the first two spots, while points leader Jack Harvey had to surrender to fellow SPM driver RC Enerson for third.

But even the charging Enerson had no answer for the Carlin duo early on as both Chilton and Jones reliably gained around a tenth per lap on the opposition.

They ran in formation for the first half of the race, two seconds and a half up on Enerson, with the field largely maintaining status quo.

Kyle Kaiser of Juncos, however, soon livened things up by passing Ethan Ringel for fifth, while his teammate Spencer Pigot battled side-by-side with Juan Piedrahita for several laps, eventually managing to hold station in eighth.

As the lap count ticked over the halfway point, Chilton seemingly lost momentum while looking to put Milwaukee winner Felix Serralles a lap down. That opportunity – the first Jones was given all day – was all the Emirati needed, completing an outside pass out of T2.

However, Jones himself was struggling with Serralles, but as Chilton seemed to be getting back at him, the race leader was given a break when the Puerto Rican ahead slowed massively with right front tyre damage and pulled into the pits.

Jones then caught up with Pigot, who had been quietly passed by Piedrahita. The Juncos driver tried to squeeze Jones on the inside, but eventually yielded, allowing him and Chilton through and going a lap down.

While Pigot didn’t offer enough resistance in getting lapped to allow Chilton a look, Piedrahita did – and the Brit forced his way past Jones to retake the lead.

He then passed the Colombian and, as Ringel came to a halt in T1 and brought out the caution, Piedrahita was left as a buffer between the Carlin teammates on the next restart.

The Belardi racer had a brief look at unlapping himself, but soon started yielding to those behind him, allowing Jones to slot in behind Chilton, albeit a second adrift.

However, Chilton managed to check out in clean air and, by the chequered flag, headed his teammate by a full six seconds.

Enerson took third, while Kaiser forced his way past Harvey for fourth, the duo making contact in the process.

Scott Anderson rounded out the lead-lap finishers in sixth, ahead of Piedrahita, Pigot and Shelby Blackstock.