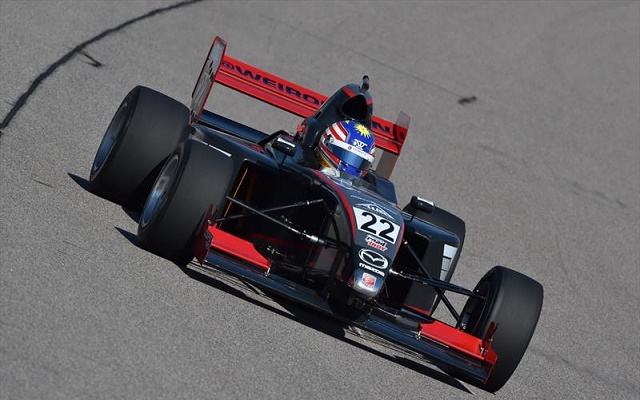 Andretti Autosport’s Weiron Tan remains the only Pro Mazda driver to lead an oval race in the series in 2015, having added an easy Iowa victory from pole to his earlier Lucas Oil Raceway triumph.

Although Garett Grist had topped qualifying, him and his Juncos teammates Timothe Buret and Jose Gutierrez were sent to the back of the grid for unapproved wing adjustments.

That handed pole to Tan, who made the most of it at the start, pulling clear of championship leader Santi Urrutia in virtually no time.

His early advantage, however, was negated 15 laps in as Alessandro Latif spun in turn two, ramming against the high wall with his rear wing.

The field’s first attempt at the restart was called off and, while Tan and Urrutia comfortably held position when the race finally went green, the latter’s squadmate Pato O’Ward passed Florian Latorre for third.

After the overtake, O’Ward could not close in on Urrutia, although the Uruguayan was dropping away from Tan at a very quick rate and trailed five seconds as the race approached halfway.

The race leader eased off shortly thereafter as he now had traffic to deal with, while his Andretti teammate Dalton Kellett in turn picked up the pace, first easing past Latorre on the lower groove and then doing the same to O’Ward for third.

Kellett then made quick work of Urrutia’s advantage and joined Tan in the top two, while the points leader bogged down, with a train of O’Ward, Latorre and Daniel Burkett soon forming behind him.

As Urrutia took his time lapping a struggling Grist, Burkett dealt with teammate Latorre, who then continued his descent down the timesheets.

When the Frenchman looked to put Grist behind him, Neil Alberico cleared him both on the outside – and a recovering Gutierrez soon passed Latorre as well.

Out front, Tan and Kellett traded fast laps, but the latter could not make significant inroads into the Malaysian’s six-second lead.

In fact, by the chequered flag Tan’s advantage had grown to nine seconds as he headed home an easy Andretti 1-2.

But another pair of teammates – O’Ward and Urrutia – continued to battle fiercely, the latter eventually slipping behind and then letting Burkett through around the outside.

Burkett then caught up to O’Ward but couldn’t find a way past the Mexican and had to do with fourth.

Urrutia nursed the car home in fifth, holding up Alberico and allowing for him to be passed by Gutierrez.

Latorre, compatriot Timothe Buret and Will Owen completed the top ten, while Grist and Raoul Owens rounded out the finishers.