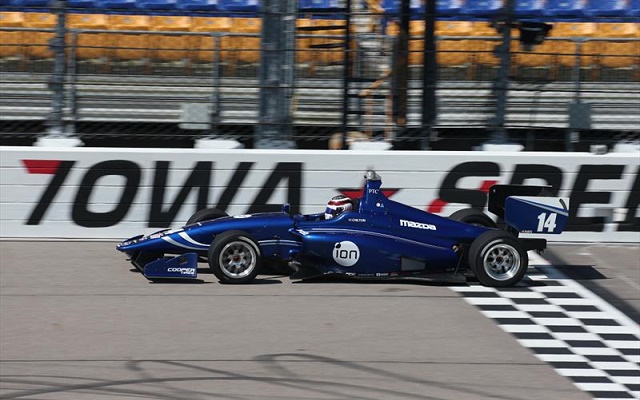 The third oval round of the 2015 Indy Lights season has seen a third different team take pole as Carlin Racing’s Max Chilton and Ed Jones locked out the front row at Iowa.

The result came as a surprise as both Chilton and Jones trailed Schmidt Peterson’s four cars in practice, with team boss Trevor Carlin stating after qualifying: “The ovals are difficult for us, we still don’t quite understand them, so what the boys have done is amazing.”

Indeed, after the four SPM drivers logged their laps, it seemed the team would lock out the first spots, with points leader Jack Harvey heading his three teammates.

But it was not to be – first Jones stunned the field with two session-best laps and then Chilton further upped the pace, recording his maiden pole in the series – and his first since his 2012 GP2 campaign, also with Carlin.

Harvey settled for third, very narrowly ahead of Ethan Ringel, while Scott Anderson and RC Enerson make up row three.

Juncos Racing’s Kyle Kaiser was best of the rest in seventh, with his title contender teammate Spencer Pigot in ninth as the duo were split by Juan Piedrahita.

Felix Serralles, winner last time out at Milwaukee, was just tenth, while the Andretti – Shelby Blackstock combination continued to struggle on ovals, leaving the driver well off the pace in 11th.