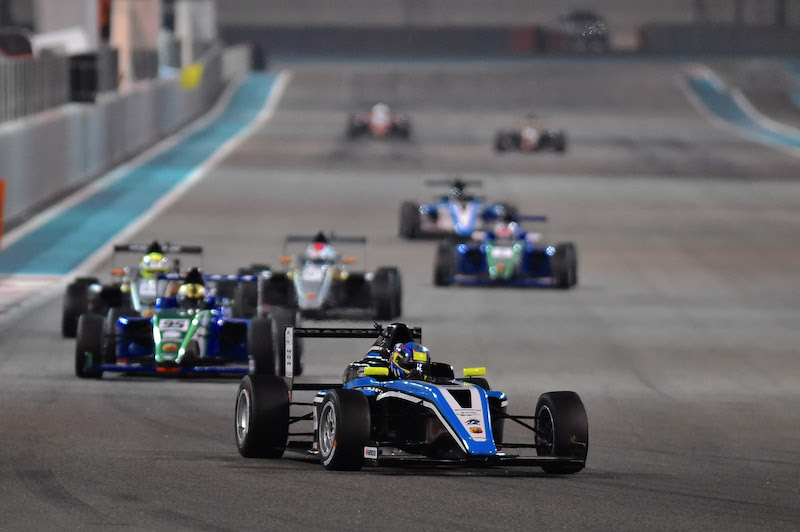 Charles Weerts left the first round of the 2017-18 Formula 4 UAE season at Yas Marina in the lead of the championship, as he and three other drivers claimed their first wins in single-seaters.

Driving for local entrant Dragon F4 in a tie-up with his ADAC F4 outfit Motopark, Weerts topped qualifying by a quarter of a second from Tom Beckhauser, who was entered by Cram Motorsport in association with the Rasgaira operation of former Yas Marina and Toyota Formula 1 chief Richard Cregan.

Weerts then fended off Beckhauser at the beginning of the first race before he asserted himself once more and went on to win by over six seconds.

Energy Dubai team-mates Lucas Petersson and Olli Caldwell finished third and fourth, with Radical racer Ollie Smith finishing fifth in what would be his only race of the weekend.

With Smith not continuing, it meant?Rasgaira driver Petr Ptacek – who is signed to drive for BhaiTech in Italian F4 next year – would start from pole.

He didn’t hold the lead for long, with Caldwell passing him on the first lap. The Briton held the position for eight laps, before Dubai-born Swede Petersson found a way through. The pair battled for the rest of the race, with Petersson triumphing by 0.672 seconds.

Bekchauser started from pole for the third race, but wasted his start-line advantage by stalling. Caldwell inherited the lead, with Weerts just behind.

They were joined by Petersson, and the trio ran nose-to-tail for the duration of the race, with Caldwell taking his first ever win in car racing.

Beckhauser made up for it in the final race of the weekend, beating Roy off the line and then holding off ADAC F4 rival Weerts to take the win.

Ptacek and Peterson were 12 seconds further back in third and fourth, with Roy eventually finishing fifth.

Single-seater debutants Mikhail Spiridinov and Logan Hannah improved significantly over the weekend, with Spiridinov getting a sixth place in the fourth and final race.

Dragon, which ran Oscar Piastri in F4 UAE last season and is not related to the Formula E team of the same name, linked up with former rival Motopark prior to the opening round of the 2017-18 season, and currently leads the championship with Weerts.

Petersson is in second, two points behind, with Beckhauser, Caldwell and Ptacek completing the top five in the standings.