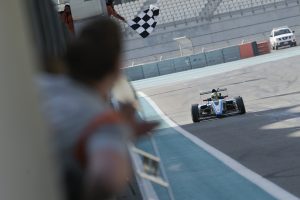 Charles Weerts was once again the top driver in the second round of the 2017-18 Formula 4 UAE season on Yas Marina’s North layout, although David Schumacher made a star turn on his car racing debut.

The 16-year-old German, son of Ralf and nephew of Michael, finished second in his native karting championship last year, and made the step up to single-seaters in style by taking pole on his first attempt.

Schumacher unsurprisingly lost the lead at the start to Caldwell, and it wasn’t long before he was also relegated by Weerts and Beckhauser.

As Caldwell romped off to his second career victory, Shumacher fought furiously with Beckhauser for third. The battle was decided by a Beckhauser mistake at Turn 8, and handed Schumacher a podium on his car racing debut.

Caldwell was victorious once again in race two, despite starting sixth on the reversed grid, but it was actually Petersson who crossed the line in first.

The Dubai-born Swede started on pole, and pre-anticipated the starting lights. This meant he had an easy run at the front until Caldwell made it to second, and the Briton closed to within eight tenths by the flag. With a 10-second penalty going Petersson’s way, Caldwell inherited victory, but his joy was short lived when one of his brake discs broke on the cool-down lap.

Caldwell had the opportunity to make it three in three in the third race, but the Briton’s pole advantage didn’t last long as his brake disc became an issue again and he was forced to the pits.

A collision between Petersson and Amaury Cordeel led to the safety car interrupting the race, until it too had its own problems and the race was red flagged.

Weerts led from the front on the restart, and finished the race two seconds ahead of Schumacher. Third place was a far closer contest, with Beckhauser prevailing by 0.153 seconds over Pasma, and Petersson just a few tenths behind.

Lucas Alecco Roy finished sixth, meaning he started the final race of the weekend on pole.

The German held on for a short while, but eventually succumbed to the attacks of Peterson and Pasma.? The pair battled for the lead, before Pasma dropped into the clutches of Schumacher, Weerts and Roy.

The Finn held onto second, but was then penalised for dangerous driving, gifting Schumacher his third second place of the weekend. Third for Weerts means his championship lead now stands at 22 points over race four winner Petersson, with Caldwell a further three behind after making no progress from the back of the grid.

Beckhauser sits fourth in the standings, with Schumacher already in fifth despite not being present at the first round of the championship.

Hungarian karter Laszlo Toth will replace Morricone at DR Formula for the third round of the championship at Dubai Autodrome, where Mucke Motorsport and Niklas Krutten may also make their scheduled appearance in the championship