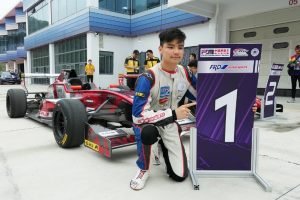 Leong, from Macau, won both the Asian Formula Renault and Chinese Formula 4 championships last year, and had initially been set to graduate to the Formula Renault Northern European Cup with BlackArts Racing, the team that ran him in Asia.

The 16-year-old has now switched to the Silverstone-based Hitech squad for the inaugural season of Asian F3, which starts at the Sepang International Circuit in July.

?I?m really excited to join such an experienced team that operate in multiple championships,” said Leong.

“I?m fully confident that we will be competitive in Asian F3 this year.?

Hitech team principal Oliver Oakes added: “We are really happy to welcome Charles into our Asian F3 line up.

“His success over the past few years proves that he is an extremely able driver and we are confident that he will shine through this season.?

Hitech currently leads the drivers’ championship in European F3 after two rounds with Enaam Ahmed, and is second in the teams standings.

They are also fielding Raoul Hyman in Asian F3. The South African is a winner in GP3 and took a pole in Euroformula Open last year.

Six other teams have announced drivers, with a provisional grid currently consisting of nine drivers.

Conwright is a single-seater champion in the USA, and has also competed in Italian F4. Monegasque driver Prette finished third for BlackArts in AFR last year.

Super License have signed Japanese pair Tomoki Takahashi and Takashi Hata, who both competed in their home F4 championship in 2017.

Jeremy Wahome, who has competed in BRDC British F3 for the last two years, will drive for SVC Asia, while Yin Hai Tao, who drove in Formula Masters China (the predecessor to Asian F3), will drive for Chinese team Zen Motorsport

The shakedown of the Tatuus F3 T-318 halo-shod car was set to take place at some point this week, ahead of its competition debut next month.