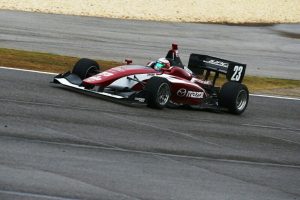 Victor Franzoni topped the Indy Lights segment of the Mazda Road to Indy test at Road America this week.

The Brazilian, who has finished on the podium twice this year and is fourth in the standings, set a 1m52.7325s in the third of the four sessions for Juncos Racing.

Andretti Autosport’s Patricio O’Ward was second fastest, and the only other driver to break the 1m53s barrier.

David Malukas topped the Pro Mazda test for BN Racing, and will be joined by a new team-mate for the two races this weekend.

BRDC British Formula 3 driver Toby Sowery is only confirmed at the team for one event so far, and is also racing in Italian Formula 4 with Monisha Kaltenborn’s KDC Racing team.

Kaylen Frederick followed up his second place in the last race at Lucas Oil Raceway by topping the USF2000 part of the test.