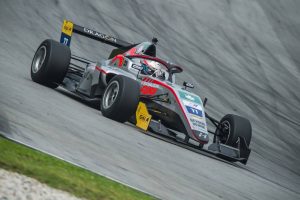 The 16-year-old from Macau stepped up to Asian F3 this year with Hitech, and is currently third in the standings after taking a podium in the opening round at Sepang (pictured).

Hitech has entered a fourth car for the Silverstone European F3 round to accommodate Leong alongside its existing line-up of Enaam Ahmed, Ben Hingeley and Alex Palou.

“I needed to do one of the European F3 rounds to get the entry to the Macau Grand Prix,” Leong explained to Formula Scout.

“I tested the Dallara F317 last week at Pembrey. The car is amazing.”

The last Macanese driver to compete in the Macau GP was Andy Chang, who finished 12th in 2016 with?ThreeBond with T-Sport. There has only ever been one home winner, with Andre Couto triumphing in 2000.

Leong karted in Macau and China before stepping up to single-seaters in 2016, taking a win in Chinese F4 and finishing seventh in Formula Masters China, run by current Asian F3 organiser Top Speed. For 2017 he graduated to Formula Renault, and dominated both that and Chinese F4 with BlackArts Racing.

He was originally supposed to make a switch to the Formula Renault Northern European Cup this year with BlackArts, before both parties chose to enter the inaugural season of Asian F3 instead.

Prior to the season he then made the move to Hitech, where he partnered GP3 race-winners Jake Hughes and Raoul Hyman in the opening round at Sepang.