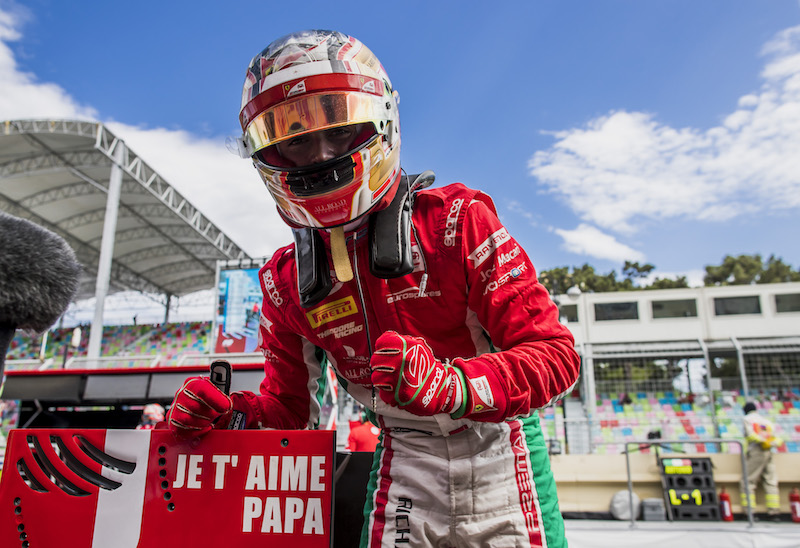 Charles Leclerc maintained his unbeaten streak in Formula 2 qualifying with a dominant showing at?round four of the season in Baku.

In a session interrupted by red flags on three occasions, the Ferrari-supported Prema driver was more than half a second quicker than anyone else.

The Monegasque is competing in Baku in honour of his father, who passed away on Tuesday.

The second half of the 30-minute session ran clean, with Leclerc first moving himself 0.7 seconds clear of Nobuharu Matsushita and then narrowly improving again before the end with a 1m52.129s.

Matsushita also lowered his time but had to settle for a front row start, 12 months on from the safety car restart issues in Baku that earned him an event ban.

Nicholas Latifi triggered the third of the stoppages when he broke his front wing against the Turn 8 wall but returned to the track to?match his best qualifying result to-date to take third.

Series veterans Johnny Cecotto and Sergio Canamasas locked out the fourth row in front of Leclerc’s championship rival Oliver Rowland, who wound up ninth after crashing in practice.

Robert Visoiu rounded out the top 10 in only his second weekend back in the series with Campos.

Sergey Sirotkin’s return in place of the injured Alex Albon got off to a bad start when he came to a halt early in practice, and he qualified 17th.

Luca Ghiotto is set to start last after he crashed before getting a competitive time on the board.

That caused the first red flag, and the second came soon after the restart, with the reasoning unclear.