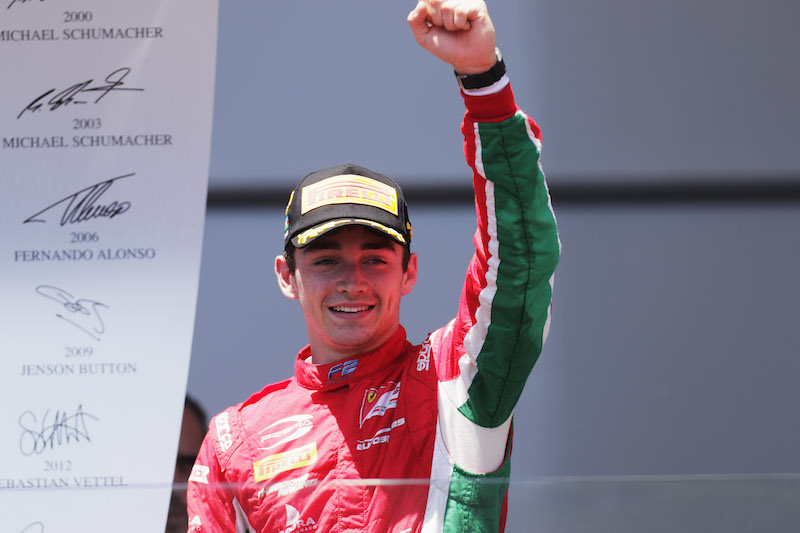 Charles Leclerc?s fine start to his Formula 2 career continued as he took an emotional victory in a disrupted and shortened feature race in Baku.

It was only out for one lap, however, and Leclerc led the field away again after the restart.

Leclerc pitted for medium tyres, having started on super softs, on lap eight. On exit?from the pits, he had to brake?to avoid a collision with the ART car of Nobuhara Matsushita, having been released into its path.

Nyck de Vries finished in second place, pitting a lap later than Leclerc in the attempt to ?overcut? the championship leader. He could close in while Leclerc was battling Russian Time’s Luca Ghiotto but could not find a way through.

Ghiotto was on an alternative strategy having started at the back of the field. Leclerc was taking it conservatively as he looked to find a way past Ghiotto, which allowed de Vries to close in.

On lap 12, the safety car was deployed again as Louis Deletraz?s race came to an end. He lost the rear of his car at Turn 3 before hitting the barrier on the exit.

It was out for three laps and Ghiotto could keep his lead on the restart from Leclerc. It would be another three laps before Ghiotto would pit ? before Leclerc or De Vries got by ? allowing the Monegasque driver to control the race.

Leclerc pulled out a gap on De Vries of around two seconds to control the race, while also setting the fastest lap of the race to take a clean sweep of points available to him up to this point of the race weekend, which comes after his father died on Tuesday.

But the race would end in confusion on lap 25 when Sean Geleal crashed at the narrowest point of the track, Turn 8. Sergey Sirotkin, standing in for Alex Albon, had nowhere to go and hit the stranded Arden car of Gelael.

Gustav Malja and Matsushita were also involved in the incident.

A safety car was initially deployed but red flags were thrown when it became apparent no cars would be able to get past the incident.

It meant the results were taken from lap 24, and Nicolas Latifi finished third ahead of DAMS team-mate Oliver Rowland.

Artem Markelov was fifth, ahead of Norman Nato, who found himself battling Jordan King for sixth for a lot of the second stint.

Ralph Boschung, who, like Ghiotto, was on an alternative strategy, finished eighth and will take reverse grid pole for tomorrow?s sprint race.

The Swiss driver went down the escape road at Turn 2 after pitting, but managed to keep the place after the count-back.