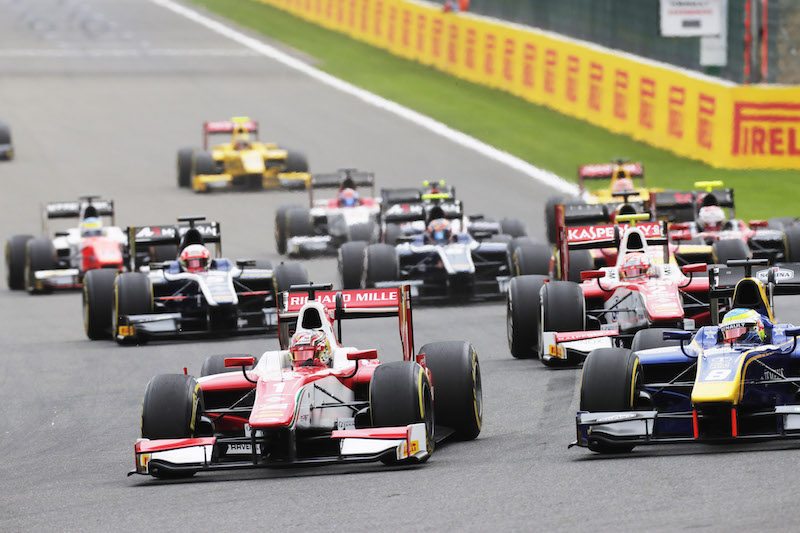 The pole-sitter had the front row of the grid to himself when Nicholas Latifi failed to take that start, but he was challenged into the first corner by the other DAMS driver Oliver Rowland, who went side-by-side on his outside under braking.

Leclerc used the inside line to stay ahead, and on the exit his rear-left wheel made contact with Rowland’s front wing, removing the upper element on the right-hand side.

Despite a virtual safety car on the opening lap while the stalled car of Nobuharu Matsushita was restarted, Leclerc led by 2.5 seconds when Rowland pitted on lap six to swap his soft tyres for mediums.

Leclerc waited another four laps before he pitted, and after rejoining he had a five-second margin over Rowland, who was briefly stuck behind the slower Norman Nato on the alternate strategy.

He extended that margin to 26.6 seconds by the end, as Rowland was pipped at the line by Artem Markelov by 0.072s.

Starting ninth on the grid, Markelov got up to fifth on the first lap, nipping past the Racing Engineering cars of Gustav Majla and Nyck de Vries when they made contact in the middle of Les Combes.

Markelov and Fuoco rejoined back behind the Racing Engineering duo when they pitted themselves with nine and 10 laps remaining respectively, but soon cleared them.

Russian Time driver Markelov passed team-mate Ghiotto around the outside into Les Combes at the second attempt with four laps remaining, then caught Rowland on the final tour.

Rowland managed to defend second on the entry to the Bus Stop chicane, only for Markelov to use his superior grip to try around the outside on the exit.

Markelov then ran well wide onto the run-off but rejoined the track just ahead of his rival.

Ghiotto managed to hold off Fuoco by 0.3s to finish fourth, while Malja and de Vries completed a much-improved showing from Racing Engineering on the Dutchman’s debut with the team.