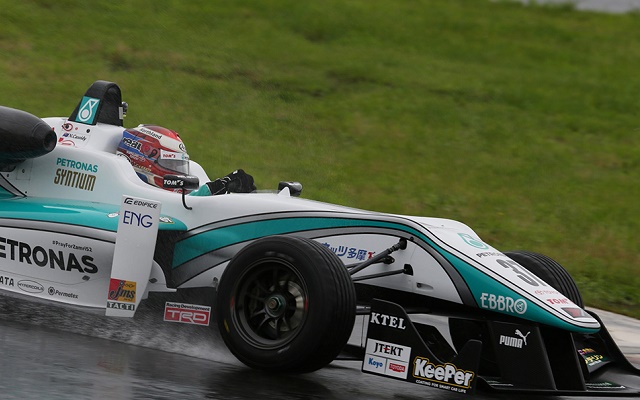 TOM’S driver Nick Cassidy is back into the Japanese F3 points lead after winning the first race of the series’ second visit to Fuji.

The Kiwi took pole by one tenth over fellow championship contender Mitsunori Takaboshi and led every lap of the race that was held on a very wet track.

However, it wasn’t all smooth sailing for Cassidy as Takaboshi actually got to lead for a couple of corners, having managed to take the inside line into turn one at the start.

But the Kiwi pulled off an audacious move around the outside of the 100 R curve and had checked out to the tune of a second by the end of lap one.

Takaboshi quickly found himself under pressure from Nirei Fukuzumi and could only keep the HFDP driver at bay until around halfway into the race when Fukuzumi finally stormed past on the main straight.

By that point, Cassidy was already five seconds up the road – and while Fukuzumi got his advantage down to three seconds and posted the fastest lap, he would have to do with second.

Takaboshi couldn’t keep up with the duo and settled for third, finishing ten seconds down on Fukuzumi.

He was down to fourth after the start and a ran deep into T1, letting Kenta Yamashita and Tsubasa Takahashi through and eventually finishing sixth.

Yamashita, who had led the championship coming into the race, made a similar mistake with four laps to go, giving up fourth place to Takahashi.

In the National Class, Ryo Ogawa eased to another win, finishing 30 seconds ahead of nearest challenger Ai Miura.