Cassidy cruises to Japanese F3 race one win at Okayama 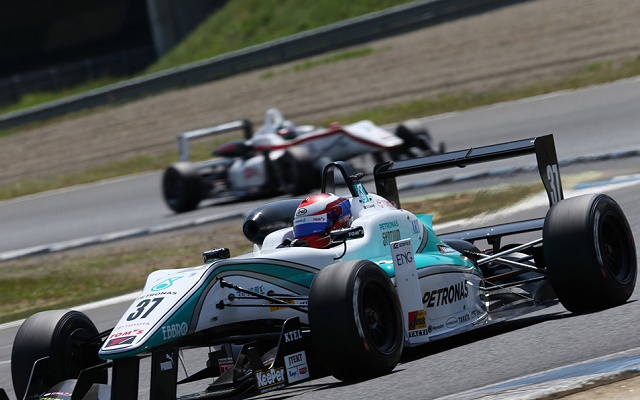 Petronas TOM’S driver Nick Cassidy was in a league of his own in the first race of Japanese F3’s third round at Okayama, finishing almost ten seconds in the clear.

The Kiwi secured his third win in the series in six races and will head into tomorrow’s follow-up as the championship leader.

The grid saw an all-too-familiar front row lockout by TOM’S, but a fight between teammates that was seemingly on the cards did not end up taking place.

Instead, while Cassidy got a solid launch, Kenta Yamashita stalled and let a number of cars through before he could finally get going.

Nirei Fukuzumi weaved past Yamashita’s slow car on the right to move up to second, with Mitsunori Takaboshi enduring a somewhat slow getaway from third.

Fukuzumi was all over Cassidy on the opening lap, albeit the Kiwi seemed to have it well under control until a lap two collision between Ai Miura and Dragon brought out the safety car.

At the restart, Cassidy rapidly established a solid lead, while Fukuzumi found himself on the receiving end of a drive-through penalty, as did Yamashita – both, seemingly, for ever so slightly jumping the start, which appeared to have caused Yamashita’s stall.

The race for victory was over just then, with Cassidy pulling away from the rest of the podium, which featured battling teammates Lucas Ordonez and Takaboshi.

Ordonez would prevail, recording his maiden podium in the series in second place, while Takaboshi had to settle for third.

Yamashita, who finished eighth, will start tomorrow’s race from pole alongside Cassidy.

Aitken storms to pole in first Alps qualifying at Spielberg