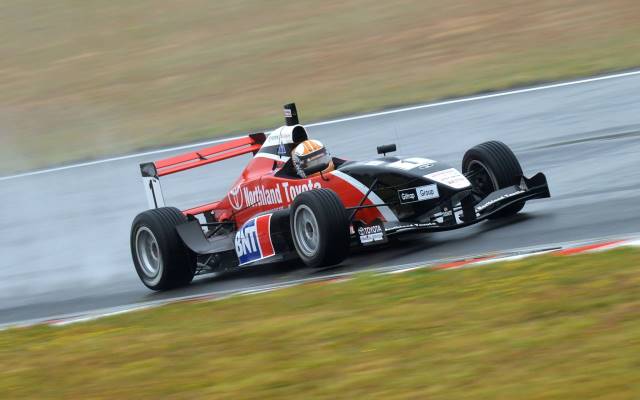 Two-time Toyota Racing Series champion Nick Cassidy has claimed a double pole position on his return at the 2014 finale at Manfeild.

In both wet qualifying sessions – which set the grids for races one and three respectively – the New Zealander finished ahead of championship rivals Andrew Tang and Jann Mardenborough.

Cassidy was 0.226 seconds clear of Neale Motorsport team-mate Tang in the opening session, and then 0.39 ahead in session two, when a misfire forced Tang to abandon his session early while on top. Cassidy is aiming to claim a third straight New Zealand Grand Prix crown in race three.

Mardenborough, who lies seven points in arrears of Tang, twice hauled himself up to third late in the sessions, while Ryan Tveter enjoyed a strong showing by securing a pair of fourth-place grid slots.

Egor Orudzhev and Damon Leitch – in the title frame with 24 and 29 point deficits respectively to Tang, claimed fifth and sixth spots in session one. James Munro was seventh ahead of Matteo Ferrer, Gustavo Lima and?Steijn Schothorst, who triggered a red flag with an off.

Munro took fifth in session two with Ferrer in sixth. Martin Rump – the fifth title contender, who was 11th in session one – was seventh ahead of Leitch, Levin Amweg and Macauley Jones. Orudzhev was 13th.