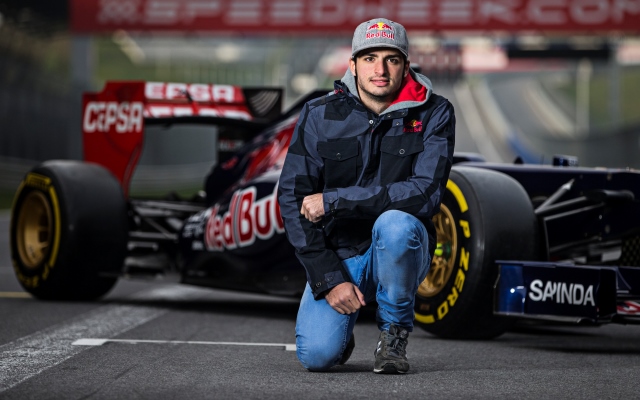 Formula Renault 3.5 champion Carlos Sainz has secured the available Toro Rosso Formula 1 seat for 2015, it has been confirmed.

Sainz had been in contention for the seat alongside Max Verstappen, together with current incumbent Jean-Eric Vergne and fellow Red Bull Juniors Alex Lynn and Pierre Gasly.

The 20-year-old Spaniard claimed a record seven wins on his way to winning the FR3.5 title with DAMS, succeeding Kevin Magnussen.

After a karting career that saw him win the 2008 Asia-Pacific KF3 title and the 2009 Monaco Kart Cup and finish second in the European Championship, the son of world rally champion Carlos Sainz made his single-seater debut at 15 as a Red Bull Junior in 2010 in Formula BMW.

He finished fourth as the top rookie in the European series, winning at Silverstone as well as taking three wins as a guest in the Pacific series. Moving onto Formula Renault 2.0 for 2011, Sainz won the NEC and finished second in the Eurocup.

He stepped up to F3 at 17, winning five races and finishing sixth in the British series, as well as ninth in the Euro Series. In GP3 in 2013, he finished tenth overall.

“I am really happy to have landed the drive with Scuderia Toro Rosso,” said Sainz. “Ever since I have been part of Red Bull’s Young Driver Programme, this has been my aim and I want to thank Red Bull for putting their faith in me.

“I have had a very successful season in World Series by Renault this year and now I am looking forward to taking the step up to Formula 1. I tested for a day with Toro Rosso last year and I liked the atmosphere in the team.”

Team boss Franz Tost said: “With Carlos Sainz joining Max Verstappen in our driver line-up next year, we continue the Toro Rosso tradition of providing youngsters from the Red Bull Junior Driver Programme with their first steps in Formula 1.

“I have watched Carlos progress through the junior categories, always improving as he moved higher up the ladder, culminating in a well-deserved win in this year’s World Series. However, I also remember the day’s testing he did with us at Silverstone in 2013 in the STR8. He really surprised me and his engineers that day, with his mature approach and his speed.”