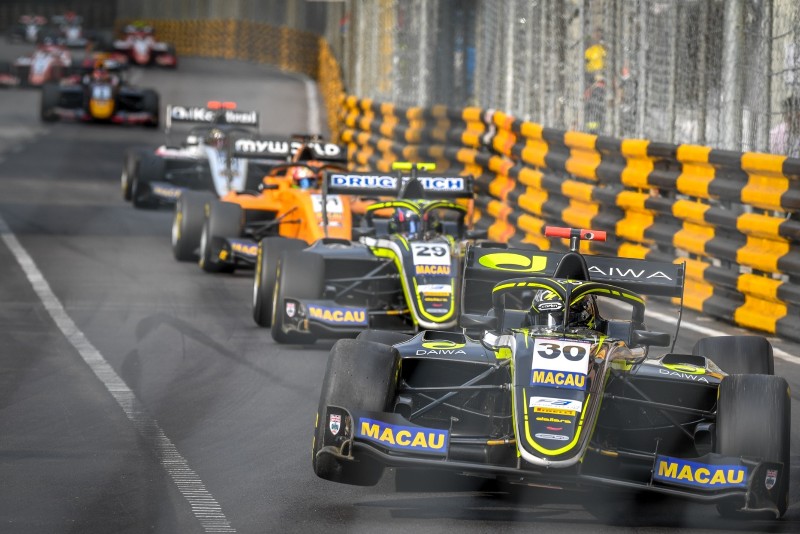 Carlin’s Logan Sargeant will start sixth in tomorrow’s Macau Grand Prix, despite starting a crash in the qualification race that almost ended both of his team-mates’ races.

The American made a rapid start from 10th on the grid and attempted to pass sixth placed Arjun Maini down the inside of Lisboa, the first braking point in the lap.

His front wing tapped the Jenzer Motorsport driver’s right-rear wheel, sending Maini into the barriers in a way that resulted in the rear of his car sticking out at the exit of the corner.

Sargeant drove on without consequence, with HWA Racelab’s Jake Hughes and Carlin team-mate Dan Ticktum being the next to the scene. Ticktum was trying to pass Hughes through Lisboa and they were side-by-side as they reached Maini.

Hughes had no time to react, and by crashing into Maini he then propelled Ticktum into the opposite barrier. At the same time, Ticktum was sent into the air by ART Grand Prix’s Ferdinand Habsburg from behind, but somehow he still had four wheels when he landed and was able to return to the pits. Repairs to his car took two laps, but he took the chequered flag in 27th.

“I got a great start for the qualification race and was positioned perfectly on the inside into Lisboa hoping to avoid the usual carnage,” said Ticktum.

“Unfortunately a driver in front made an error and caused a pile up. [Hughes] tried to avoid a stationary car and pulled out into my path, damaging my suspension. Crawled back to pits and the Carlin mechanics did an incredible job, yet again, and got me out but nearly three laps down. Time for some overtaking tomorrow!”

A free practice crash earlier in the weekend resulted in a full rebuild of the rear of Ticktum’s car, meaning he missed half of the second qualifying session and started down in 13th.

Hughes was similarly unimpressed with the crash.

“Problem with F3. Load of kids who never seem to learn from their mistakes,” he said. “I try not to believe in luck but after today I truly believe I am the unluckiest guy in motorsport.”

The third Carlin car of Felipe Drugovich qualified 16th, but fell to the back after he rear-ended MP Motorsport’s slowing Liam Lawson at Lisboa. Remarkably, after reversing out of the crash he was 18th, and was up to 14th before crashing out with two laps to go.

While Ticktum and Drugovich will be optimistically hoping to make it into the top 10 in the grand prix, Sargeant believes that “with a few tweaks we can make for a bit of a better balance. with our pace I can definitely aim to be on the podium”.