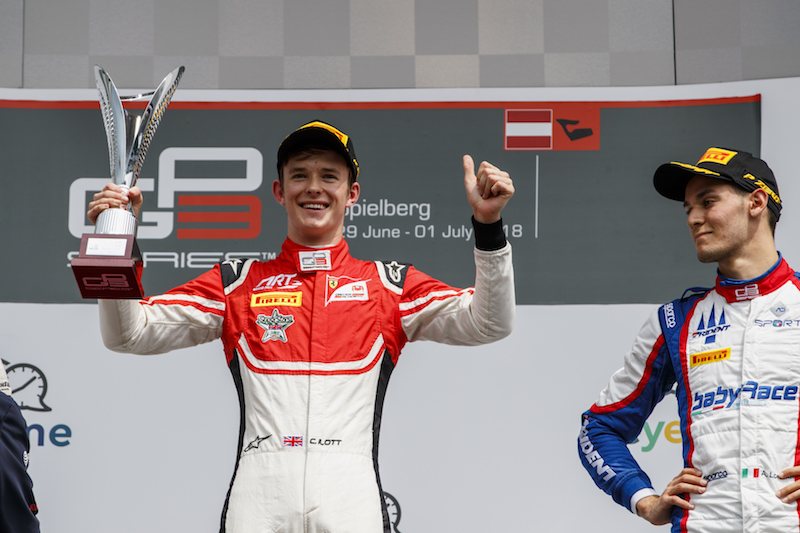 Callum Ilott took his second straight GP3 win with a commanding drive from pole position in the opening race at the Red Bull Ring, moving into the points lead after team-mates Anthoine Hubert and Nikita Mazepin collided.

Ferrari junior Ilott made a great start from pole position, as fellow front-row starter Jake Hughes was passed for second by Alessio Lorandi.

Ilott’s attempt to make a break was denied by the safety car, which came out after Joey Mawson stopped before he even reached the first corner having struggled to get away from the line.

A bizarre moment followed as Lorandi headed for the pits, misled by a message from race control that said the safety car would travel through the pits.

He was allowed to retake second place before the restart, where he immediately came under attack from Leonardo Pulcini, enabling Ilott to build a gap of 1.7 seconds within a lap.

Ilott maintained his advantage at that size for some time, even after Pulcini cleared his fellow Italian into Turn 4 on lap seven of 24.

In the second half of the race he simply pulled away however, finishing 4.5 seconds clear to receive the winning trophy from his former boss, Red Bull’s Helmut Marko.

The result gives Ilott the championship lead after Hubert’s attempted recovery from the back row of the grid ended in disaster.

Hubert was up to 11th by the time the safety car came out, and later fought his way up into eighth place by lap 14, but only after contact with Juan Manuel Correa on the run to Turn 4 damaged his front wing.

This perhaps contributed to him being repassed by David Beckmann on the approach to Turn 9, where Mazepin – down the order after contact with Pedro Piquet at the first corner of the race had forced him wide – also made an ambitious bid to pass him down the inside.

The two ART drivers made contact, sending Hubert spinning down to the back of the pack, where he trailed in as the last finisher on the lead lap in 17th, four places behind Mazepin.

Pulcini took second, having been cleared in an investigation into whether he had passed Hughes under safety car conditions at the end of the first lap.

Lorandi completed the podium, despite being repassed by Hughes on lap nine and coming under attack from Trident team-mate Piquet four laps later.

One lap later, Lorandi was able to get back past Hughes, who would also go on to lose fourth to Piquet.

All four Trident cars were in the top seven, with Giuliano Alesi claiming sixth on the final lap away from team-mate Ryan Tveter after the pair had banged wheels one lap earlier.

Beckmann took reversed-grid pole in eighth, fighting back against Simo Laaksonen after an intense fight between the two.

Dorian Boccolacci made a late pass on MP Motorsport colleague Niko Kari for the final point in 10th, having also been forced wide at the start together with Mazepin.