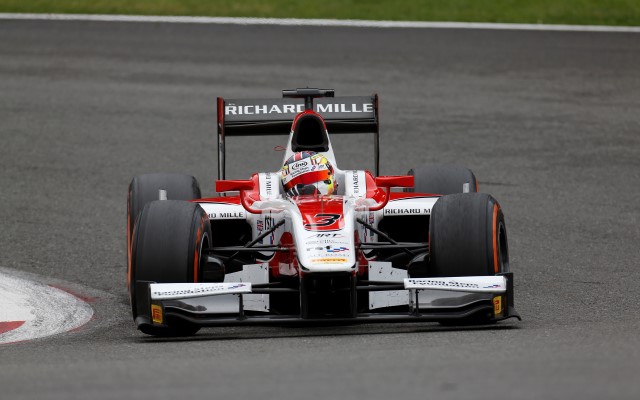 James Calado secured his first GP2 win for over a year as he held off pressure from Julian Leal to win the sprint race at Spa-Francorchamps.

Calado started from pole position and kept the lead off the start, but gradually came under more pressure from Leal as the race wore on, winning by just 0.4 seconds.

Adrian Quaife-Hobbs surged from tenth to third on the opening lap and closed up to the two cars ahead of him in the closing stages as he added a podium in his second weekend with the Hilmer squad to add to the one he scored for his old team Manor MP in Monaco.

Stephane Richelmi had a very quiet run to fourth after dropping a couple of spots off the start. Stefano Coletti went from 13th to fifth on the first lap but later struggled with the set of option tyres he had on, plummeting down the order before pitting.

Fabio Leimer took fifth to bank some points towards his pursuit of championship leader Coletti. Jolyon Palmer was sixth and Johnny Cecotto was seventh, while Tom Dillmann claimed the final point in eighth. Felipe Nasr came through from the back of the grid to finish just behind Dillmann, but only after the Frenchman had cut the final corner to stay ahead.

Coletti keeps his six point margin over Nasr that he had coming into the weekend after both failed to score, but Leimer is now only a point behind Nasr. Sam Bird, who fell back to 14th in the race, is a further seven points behind while Calado’s win keeps him in touch another ten points back and now within a feature race win of Coletti.